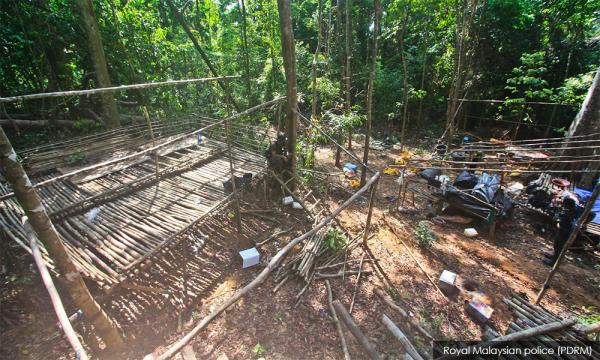 WANG KELIAN RCI | A witness in the Wang Kelian Royal Commission of Inquiry today testified that he was instructed not to proceed with the investigation after the first body was found at the summit of Bukit Wang Burma on March 6, 2015.

Junaidy said he was not sure why the instruction was issued by the Padang Besar police chief, when the latter was leading the mission to dig out the grave-like structure with the forensic team on their return visit to the scene on March 6.

"The mission that day was to ascertain whether there were bodies buried in that grave-like structure, and after digging at a depth of more than one foot, the team members found something wrapped in white cloth.

"When the cloth was removed we found decomposed human remains… the body was not removed, but was reburied after photographs were taken,” he said when testifying on the fourth day of the public hearing before the seven-member RCI panel led by former chief justice Arifin Zakaria here today.

Junaidy, who is currently based in Kedah as Pendang police headquarters Crime Prevention and Community Safety Division chief, said the forensic members then marked the 34 grave-like structures with forensic numbers for further action.

Junaidy said upon instructions received from Padang Besar district police chief, an sudden death report was opened on March 8 for a postmortem to identify the cause of death.

"Following that date, I did not conduct any investigation or follow-ups after being instructed by the district police chief, until I was called by Bukit Aman to meet the deputy inspector-general of police on May 11, 2015," he said.

Junaidy earlier told the inquiry that they returned to the camp after the 38 illegal immigrants who were detained on Jan 19, 2015 were interviewed.

Six of them had reported seeing a piece of land that resembled a grave at the temporary transit camp.

Subsequently, he said he was directed to go to the location on Jan 23 to have a look and make a rough sketch of the area to be presented to his superiors.

After presenting the report, he returned to the temporary transit camp on March 6 with the Perlis forensics team to identify whether there were bodies buried in the grave-like structures.

When questioned by former IGP Norian Mai as to why no immediate action was taken when intuition should have told him that this was a criminal case, Junaidy said he could not take matters into his own hands, as this was a big case and he had no experience in handling such cases.

Junaidy also informed the inquiry that the case which was initially classified as a police inquiry paper was investigated under Section 26A of the Anti-Trafficking in Persons and Anti- Smuggling of Migrants Act 2007 after his meeting with the DIGP on May 11, 2015.

According to him, then-IGP Khalid Abu Bakar later launched an operation codenamed ‘Op Wawasan Khas’ on May 25, 2015, for a thorough inspection to be carried out at the Bukit Wang Burma and Genting Perah areas and the operation was conducted entirely by Bukit Aman.

He said subsequently ‘Op Wawasan Khas 2’ was mounted on August 16, 2015, during which the remains of 106 victims were discovered, adding that some of the remains were found in a detention shack.