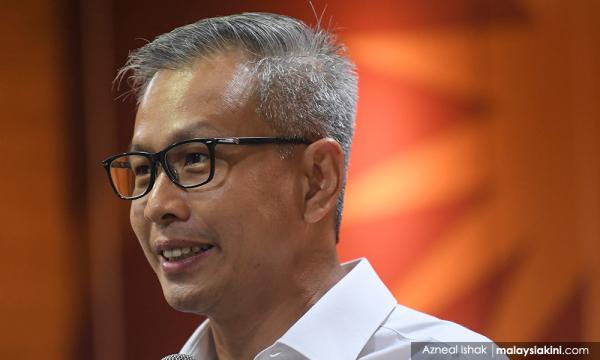 Yoursay: Good for Pua to rebut UBS analyst - but is it enough?

YOURSAY | 'After all these months, there is too much bark and no bite.'

But there is certainly some paralysis with this government. After all these months, too much bark and no bite.

There is still so little accountability. There are still wrists being slapped for 'mismanagement', whereas in any other country, they would be behind bars awaiting trial.

A few days of headlines and then we hear nothing, as it is all swept under the carpet. Everyone is sick and tired of the lack of action.

Teej Dhillon: How anyone still believes Pua amazes me. UBS is an international organisation with wide access to all market information.

And what vested interest would an organisation like UBS have in lying about the Malaysian economy?

Pakatan Harapan MPs and ministers are just scrambling to defend their poor management of the economy by relying on the selective interpretation of statistics, instead of focusing on real hard evidence.

The fact is that the ringgit is one of the worst-performing currencies in the region, our stock market has declined since GE14 (one of the only markets in Asia to do so) and our GDP has been revised downwards not only by third parties, i.e., Maybank and Moody’s, but also by Bank Negara itself.

And that oil revenue making up 20-30 percent of the country’s GDP mentioned above is fairly supportable as well.

This US government page says: "Despite the low price of global crude oil, this sector remains important to the country (Malaysia) as it contributes between 20 to 30 percent to the country’s GDP."

Currently, with oil being at near US$70 per barrel, it doesn’t seem logical that this figure would reduce.

People need to wake up and not believe these government spokespersons, but really question their fundamental understanding of how the economy works and start to demand action from leaders to steer the economy through these rough waters. Blind support won’t help anyone.

You claimed that UBS has wide access to all market information, so it should be very accurate. I don't think that Pua said the UBS analyst Kelvin Tay lied, just that he is incompetent.

Since you sound so competent financially by implying that you understand the fundamentals of how the economy works, can you rebut Pua point by point on the issues he raised? That would really convince us readers that he cannot be believed.

The first point that Pua raised is that the UBS analyst does not know the difference between current account deficit and fiscal deficit. Can you prove that Pua is wrong?

Second, Pua said the fiscal deficit will get less and less. Since you said Pua cannot be believed, please rebut this point.

Third, Pua said the claim of political paralysis in Malaysia by the UBS analyst is not true. Can you rebut the point?

If you can, then we readers should believe you instead of Pua. Otherwise, you are just blowing hot air.

You claimed that Harapan is just scrambling to defend the poor management of the economy through selective statistics. I can also say that of you.

You are also using selective statistics to show the Harapan government is performing poorly. How do you convince us that you are not doing the same? Rebutting Pua point by point is one way.

I await your rebuttals to him with bated breath.

Anonymous_1529132749: I viewed a YouTube video clip of the Bloomberg interview.

It seems to me Tay was suggesting the current account for 2019 might be in deficit due to excessive underperformance of the oil price, from the budgeted price of US$70 per barrel, which is a main source of budget income for Malaysia.

In this sense, Malaysia looks likely to be in budget deficit as well as current account deficit. Finance Minister Lim Guan Eng was reported to have estimated a 3.7 percent fiscal deficit not long ago.

Fairview: Believe what the economist says fully at your own financial risk.

Some of these financial analysts pick up stories from various unverified sources and use them as the gospel truth without doing research to fact check the sources.

Sensational comments win you attention, but eventually discredit the analysts.

However, you cannot entirely blame them, because Malaysia is full of negative commentators and news reporters who like to seize on the smallest negative political and economic news to show the world how bad things are in the country today.

Bobster: Well done, Pua, for the rebuttal. Otherwise, silence means consent. It is shameful that such an economist can be invited for the interview.

Anyway, there is this term in the financial community, "Economists are those who failed to make it as accountants." No offence, by the way, to all economists out there.