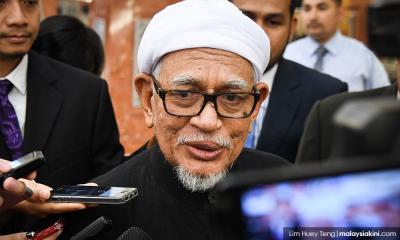 PAS president Abdul Hadi Awang (above) said the party does not have any objection and even welcomes PKR president Anwar Ibrahim to reveal the identities of PAS leaders who allegedly received RM90 million from Umno.

"It is up to him (Anwar), let him reveal who are the leaders. Then we will respond.

"We do not have any proof (of the allegation) because we run (the party) on our own. Probably, if we were to total the amount of donations that PAS received in every ceramah all these years, the collection is higher than RM90 million.

"We can set up thousands of Pasti (Pusat Asuhan Tunas Islam kindergarten) nationwide through the donations we collected," he was quoted by Sinar Harian as saying at the Perak PAS Youth annual general meeting in Sungkai, Perak today.

Hadi's comments came when he was asked to respond to Anwar's statement yesterday, claiming he would reveal the identities of PAS leaders who had received money from Umno.

Anwar (photo) made the claim during a forum with University Sains Islam Malaysia students when he was asked if the RM90 million issue was only something that was used during elections.

On Thursday, Anwar had said the revelation about the RM90 million needs time as it is still under MACC probe.

"The answer from MACC was that there was no 1MDB money channeled to PAS. The allegation was not about money from 1MDB, but from Umno, which is still under investigation.

"I have specific information on the numbers and who received the money, I have seen the accounts. But I will not reveal now. Give it some time, the issue is not closed yet," he said.

Commenting on this, Hadi, who is also Marang MP, challenged Anwar to reveal the source of political funding which had previously been rumoured to come from overseas.

He said PAS also has information on other political leaders who allegedly received outside funding in big amounts.

"We ourselves also have information about other leaders receiving foreign funding in large numbers. That is more wrong.

"So, the government should not only be investigating us. They should also investigate the others, then only it is fair," he said.