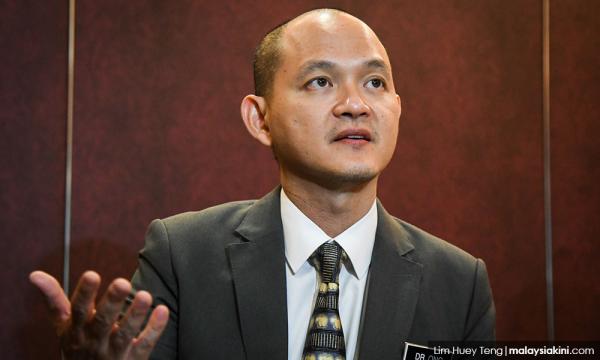 International Trade and Industry Deputy Minister Ong Kian Ming has joined his colleague Tony Pua in slamming an interview carried by Bloomberg on April 11, which features a Singapore-based banker speaking about the Malaysian economy.

"I'm sure that some of you have watched this clip of Kelvin Tay, from UBS Wealth Management, speaking about the Malaysian economy," he said.

"As someone with a little bit of training in economics, what he said was cringeworthy and factually wrong. These are mistakes a good first-year economics student would not make."

Among the mistakes that Ong claimed Tay had made was to refer to Malaysia's current account deficit of 3.4 percent, when the figure actually refers to Malaysia’s fiscal deficit.

Tay also said that the government is going to scale back expenditure, which leads to the economy "shrinking back further".

"As far as I know, projections for GDP growth in Malaysia are still on track to be at more than four percent for 2019, not ‘shrinking’ as he claims," said Ong.

Ong also said that Tay's statement that 30 percent of Malaysia's GDP is reliant on oil was inaccurate.

"While the oil and gas sector is an important part of the economy, it is nowhere near 30 percent of the country's GDP. I think he was referring to 30 percent of government revenue," said Ong, who is a political scientist by training.

"Au contraire, the new government has done quite a fair bit including cleaning up the GLCs and GLICs such as FGV and Tabung Haji, and renegotiating mega infra projects such as the ECRL, the MRT2 and LRT3 projects, which will contribute to massive government savings in the long run."

Ong was echoing the Damansara MP Pua, who said earlier today that Tay "cast extremely negative views on Malaysia based on wrong facts and outright bias" and left him "shaking his head in disbelief."

"I'm surprised that an international bank would have someone at such a senior level who can't get his basic economics right. It's fair game to criticize the Malaysian government on some of our policies but it's totally unprofessional to get even your basic economic facts wrong," said Ong.

He added that he would reach out to UBS in Singapore where Kelvin is based to express his views on this matter.

However, former prime minister Najib Abdul Razak was quick to point out that this is not the first time DAP leaders have been unhappy with reporting on the economy.

"In January last year, (Finance Minister Lim Guan Eng) was angry at Nikkei for their negative assessment of their economy.

"But Guan Eng's attacks were unsuccessful as Nikkei stuck to its story," he said on a Facebook post this afternoon.

"This time around Tony Pua is angry with Bloomberg who carried an interview with UBS, an investment bank from Switzerland with a $1 trillion in assets, He too insists that they were wrong."

"Nikkei, Bloomberg, and UBS are not political parties in Malaysia. DAP and their supporters can attack international media and investment companies, but this move will not benefit the country," said Najib.