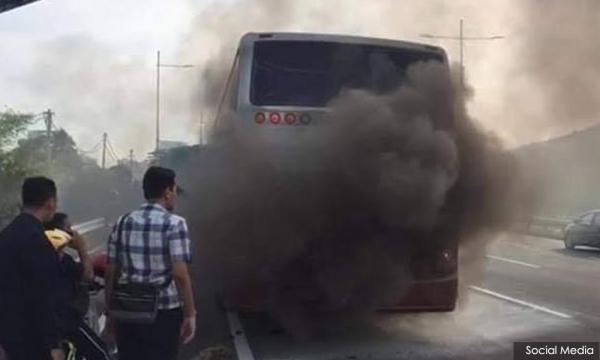 An MACC bus carrying 30 people, including 24 Road Transport Department enforcement officers suspected of corruption, broke down on its way to the Magistrates' Court in George Town today.

Bernama understands that the bus’ engine caught fire on the Tun Dr Lim Chong Eu Expressway, forcing the MACC officers to transfer the suspects into 10 cars.

With the help of traffic police, all 10 cars reached the court compound at 10.40am, just 10 minutes later than scheduled.

Sessions Court senior assistant registrar Nurfadrina Zulkhairi then ordered all the suspects to be remanded for seven days, until April 23, to assist in the probe into their alleged involvement in corruption by protecting lorry drivers who committed various traffic offences around Penang.

The case is being investigated under Section 17(a) of the MACC Act 2009.

The suspects are among 33 individuals, aged between 31 and 54, who were arrested between 10am and 4pm yesterday after having their statements recorded at the MACC office in George Town.

Three of the suspects arrested were women, who were all freed on MACC bail.

Media reports had earlier said that the RTD personnel, officers between Grades 19 and 32, were believed to have accepted monthly payments of between RM10,000 and RM32,000 as an inducement not to take action against the lorry drivers.

The lorries under their protection were also provided with special stickers prepared by "tontos", so that they could be easily identified and exempted from enforcement actions.