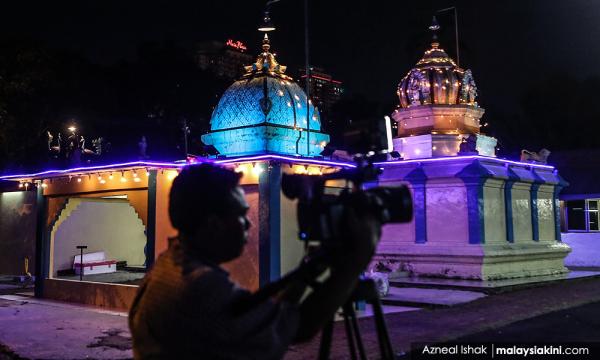 The Save Seafield Mariamman Temple Task Force today withdrew its appeal against the dismissal of its application to hold a watching brief at the inquest to determine the cause of firefighter Muhammad Adib Mohd Kassim's death after the riots at the temple last November.

The temple task force also withdrew its bid for a stay of the inquest pending disposal of its appeal.

The Attorney-General Chambers, meanwhile, withdrew its application to strike out the temple task force's appeal.

Lawyer M Visvanathan, representing the task force, said the applications were withdrawn based on the affidavit filed by the AGC on April 3 this year.

He claimed the affidavit, affirmed by deputy public prosecutor Hamdan Hamzah, stated that Adib's death was not due to being beaten.

According to Visvanathan, the affidavit also stated that a forensic pathologist had testified at the inquest that the injuries sustained by Adib, which led to his death, were not sustained due to beating.

"My client is satisfied with the content in paragraphs 5 and 6 in the affidavit, affirmed by the deputy public prosecutor, and we confirmed this in our affidavit filed on April 12," he told Bernama.

Hamdan, who appeared together with deputy public prosecutor Mohd Dusuki Mokhtar, did not object to the withdrawal.

The temple task force had filed a judicial review application seeking to have its lawyer to hold a watching brief in the inquest, claiming that it was an "interested party."

On Jan 31 this year, coroner Rofiah Mohamad rejected the application on grounds that the task force had no clear, substantive and reasonable interests in the inquest. The task force also lost its appeal at the High Court on Feb 8.

Adib, 24, was seriously injured during a riot in the vicinity of the Seafield Sri Maha Mariamman Temple on Nov 27 last year. He died at the National Heart Institute on Dec 17.

The inquest is scheduled to resume tomorrow.