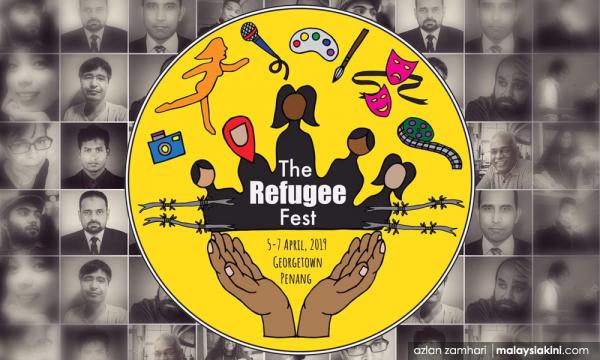 At a refugee community event last month in George Town dubbed 'Human Flow', Penang Stop Human Trafficking representative James Lochhead wondered aloud, "At a conference or solidarity gathering attended by 200, there may be only two Rohingya. Where are the rest?"

"We need to hear the voices of the migrants, the refugees and the Rohingya. They need to speak for themselves so we could better understand their plight."

It is in this spirit that a refugee festival featuring mainly migrants, refugees and the Rohingya community is being held in Penang starting tomorrow.

Spanning three days from April 5 to 7, the 2019 Refugee Festival will take place at Bangunan UAB in George Town, in which some 14 refugee artists are taking part.

According to Mahi Ramakrishnan, founder of the Refugee Festival, the event started in Kuala Lumpur four years back.

"It is aimed at showcasing the talents of refugees and to use that as a platform to continue building bridges between the Malaysian society and different refugee communities," she told Malaysiakini.

"The festival will feature a workshop on the theatre of the oppressed, film screenings, photo presentations, panel discussions, music performances and poetry reading, with 85 percent of the events participated by refugees themselves," she added.

Mahi (photo, below), an investigative journalist and filmmaker, is screening her award-winning ‘Bou’, a documentary exploring the issue of child brides, at 7pm on April 7.

A panel discussion on challenges and opportunities for refugees in Penang and under the Pakatan Harapan government will be held, also on Saturday at 4pm.

Mahi said the festival has managed over the years to group refugee poets together under the umbrella body called The Refugee Poets Society.

She said the poets have performed at the annual Georgetown Literary Festival, where one of their poets, Shamshad Chaudhry from Pakistan, won the first prize at the Migrant and Refugee Poetry Competition last year.

"We have published their first collection of poems and we have supported refugee musicians and theatre artists," Mahi said.

This year, the festival will introduce Rohingya musicians and publish a zine by Afghan poet and artist, Masuma Tavakoli.

Mahi said Masuma’s illustrations depict the human rights violations under Taliban rule, adding this zine is made possible with the support of the Canadian High Commission.

Penang-based Think City is sponsoring the venue and sound system, while a Switzerland-based NGO, Azadi, and other individuals have helped sponsor the whole event.

Malaysia, home to a large migrant and refugee community, is presently on the Tier 2 Watchlist of the US State Department’s Trafficking in Persons report for 2018, which has prompted Human Resources Minister M Kulasegaran to "declare war" on perpetrators of the crime.

Click here for further information on the ‘Inclusion for a Better World’ festival and its three-day programme.