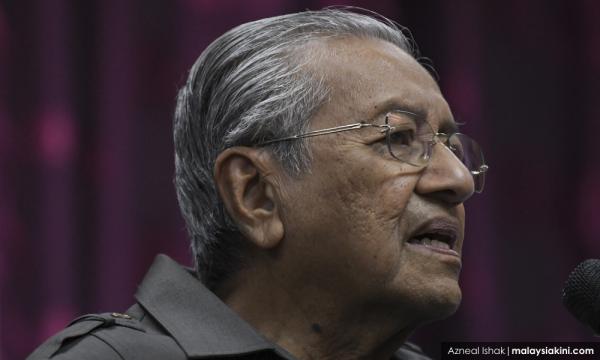 Dr M assures Bersatu not out to topple Warisan in Sabah

Dr Mahathir Mohamad today said that Bersatu will give its full support to the Sabah government led by Warisan.

The prime minister and Bersatu chairperson stressed that the presence of Bersatu in Sabah was not aimed at overthrowing the state government and seizing any post.

“We want to make it clear that when we go to Sabah, the goal is to set up Bersatu in the state, and the party is not aiming to bring down the existing government (there), but we will fully support the Warisan government,” he said.

Mahathir was speaking to reporters after chairing the Bersatu supreme council meeting in Petaling Jaya today.

He also admitted that ahead of the launch of Bersatu in Sabah on April 6, there were attempts by certain parties to create friction between Bersatu and Warisan.

“There may be parties that dislike Warisan who will try to influence the state Bersatu to go against the Warisan government,” he said.

Mahathir stressed that these individuals would not be accepted as Bersatu members.

"They need not ask people to become Bersatu members, because Bersatu is dedicated to supporting the Warisan government in Sabah, we have made a pledge on this," he said.

Meanwhile, the prime minister also said Bersatu would hold an extraordinary general meeting in May to allow the party’s constitution to be amended.

He said the amendments involve, among others, how to manage the party at the branch, division and headquarters levels.

Mahathir also reiterated that PKR president Anwar Ibrahim would assume the prime minister’s post after him.

He was commenting on allegations by Umno Youth chief Asyraf Wajdi Dusuki that he did not want Anwar to replace him as prime minister.

"He (Asyraf) has the right to voice his opinion, but I already made a statement that when I leave, Anwar will take over,” he said.