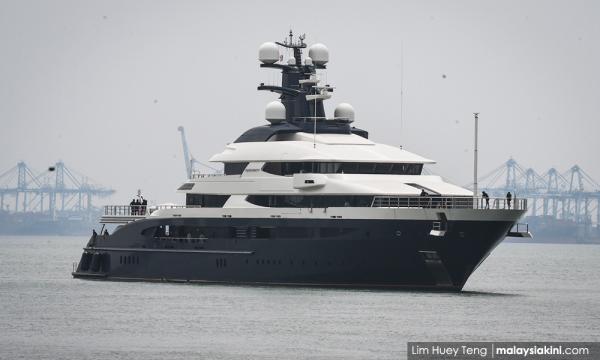 Superyacht Equanimity has been sold to Genting Malaysia Bhd for US$126 million (RM514.6 million), the Attorney-General’s Chambers confirmed in a statement today.

“The Admiralty Court in Kuala Lumpur today has approved for acceptance, the offer by Genting to purchase the Equanimity on the sheriff’s terms and conditions," it said.

The sale to Genting’s special purpose vehicle (SPV) company ranks as the highest recovery to date for the government from the 1MDB scandal, within eight months from the commencement of this action.

“The US$126 million purchase price will be paid by Genting, and received by the court, by the end of April 2019.

“It is the best offer received over the five months, from October 2018, when the Equanimity was first put up for sale. Many offers were received in this period, and a few were over US$100 million.

"It was Genting, however, that offered the highest price, that was today approved by the court for acceptance,” the AGC added.

The sale was described as "very satisfactory, historic and a high water mark in terms of ensuring that market value was secured."

"The net returns to the government of Malaysia are as good, if not more than envisaged.

“As the Genting offer was negotiated directly with the government of Malaysia, no agency commission is payable; resulting in a savings of about US$4.4 million," the statement says.

The AGC also thanked the Royal Malaysian Navy (RMN) for offering prime space in Langkawi for the Equanimity to be docked for five months, while both the RMN and the police combined to ensure its security.

According to Bernama, Genting Malaysia Bhd confirmed it is buying the superyacht together with bunkers, fuel, lubricants and other existing consumables on board.

“The Admiralty Court in Kuala Lumpur had, today, approved the offer by Genting Malaysia on the Sheriff’s Terms and Conditions. The acquisition will be undertaken by Genting Malaysia’s wholly-owned subsidiary and the completion of the sale is expected to take place by the end of April 2019.”

The acquisition would allow it to differentiate itself from its competitors and provide the company with a unique and competitive edge for its premium customers business, it said.

Genting Malaysia, which is involved in gaming, hotel and resort-related operations, said the acquisition was not expected to have a material effect on the consolidated earnings, net assets and gearing for the financial year ending Dec 31, 2019.

As at mid-day break, Genting Malaysia was up eight sen to RM3.25 with 2.69 million shares transacted.

'Equanimity can still be used as evidence in 1MDB court cases'

Equanimity sale: More is better, but it's the best we could get - Guan Eng