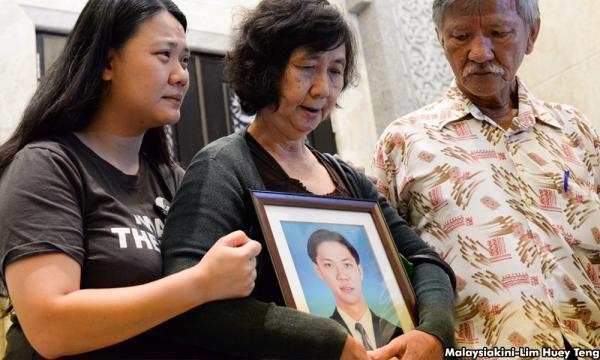 The investigation papers on the renewed probe into Teoh Beng Hock's death will be submitted to the Attorney-General's Chambers soon.

The Home Ministry said this in a parliamentary written reply to DAP's Kepong MP Lim Lip Eng, who had asked for an update on the case.

"The Home Ministry takes note of the cabinet decision on June 20, 2018, to reopen the investigation into the death of Teoh Beng Hock.

"Police have received instructions from the Attorney-General's Chambers and have taken action to record the statements of three witnesses and another from MACC.

"The investigation will continue and the investigation papers will be presented to the deputy public prosecutor soon after all instructions have been acted upon," the parliamentary reply said.

Teoh, a DAP political aide, was found dead at the Selangor MACC headquarters in 2009. He was called there as a witness for a case.

A royal commission of inquiry into his death arrived at an "open verdict" but acknowledged that Teoh was subjected to aggressive interrogation tactics by three MACC officers.

The Court of Appeal later reversed the open verdict decision, ruling that Teoh's death was caused by "unknown" persons and the MACC.

A Royal Commission of Inquiry implicated three MACC officers in Teoh's death, but they did not face any criminal action.