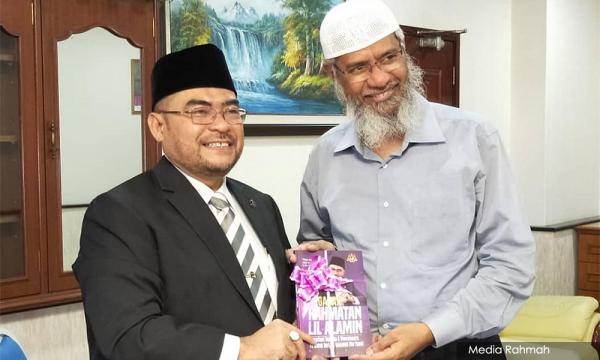 Minister in the Prime Minister's Department Mujahid Yusof Rawa's description of controversial Muslim preacher Zakir Naik as a source of inspiration has irked the Indian community, according to Hindraf leader Karthig Shan.

“If Zakir inspires our leaders, can the current government guarantee maintenance of peace and fraternity in our multicultural, multiethnic nation?

“The Indian community did not vote en-bloc for the leaders of Harapan in the last election to protect and encourage Zakir, who continues to pose, by his very presence, a threat to public order and national security,” he added in a statement today.

Karthig said the current administration should not place Zakir on a pedestal, be it religious or otherwise, as it would send the wrong signals.

He also claimed that the Indian-born preacher's continued presence in Malaysia would divide the nation, as well as stoke racial and religious tensions.

Yesterday, Mujahid met Zakir (photo, left), whom India has accused of being involved in terror activities, at the Federal Territory Islamic Department (Jawi) in Kuala Lumpur.

In a Facebook posting, the minister, who is in charge of Islamic affairs, described Zakir's preaching efforts as a source of inspiration.

Meanwhile, Karthig pointed out that Zakir, who is a Malaysian permanent resident, is a fugitive of the law since India has requested for his extradition.

He also pointed out that the preacher has been banned in several countries.

“A casual inspection of his speeches, controversial 'Peace TV', and his banned IRF website demonstrates how he has played a role in breeding sectarianism and promoting radicalisation.

“This man has openly delivered hate speeches that cause racial division... He urged Muslims to vote Muslim election candidates even if the candidate is corrupt, if the other choice is to vote for an honest non-Muslim.

“Isn't Zakir banned from preaching in some states in Malaysia for his Salafi teachings? His preaching is outrageous and comprises elements breeding mutual hatred. His lectures mock other religions. He misquotes facts relating to other religions,” he added.

However, Zakir has claimed that his image was tarnished by certain religious fanatics in India with false allegations.

“An unbiased observer would realise that never in my 25 years of lecturing on Islam and peace have I ever promoted terror, in the name of Islam or otherwise.

“In fact, not a single lecture, out of the thousands that I have delivered, has ever received objections from non-Muslims in India until in September 2012, when a group of religious fanatics sought to tarnish my image.

"My aim has always been to foster communal peace and harmony – the exact opposite of the accusations hurled at me," he said.

Last year, Prime Minister Dr Mahathir Mohamad said Putrajaya would not bow to pressure amid calls from within Harapan to deport Zakir.

“We are not always obliged to follow the will of others.

“We have to identify the reasons we respond to any pressure, whether or not he (Zakir) had adhered to the laws. Or else, someone will become a victim,” he added.