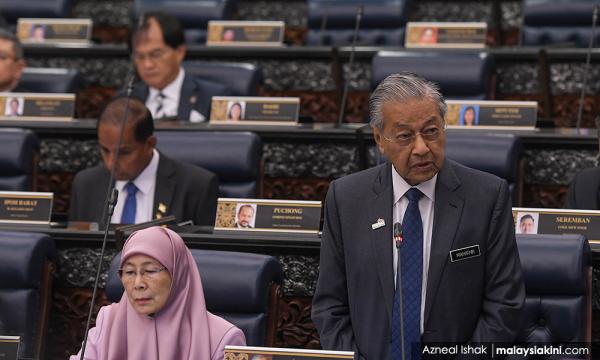 PARLIAMENT | Prime Minister Dr Mahathir Mohamad said his administration is working hard to polish Malaysia's image after it was stained by its previous label as a kleptocracy.

He said the focus was to ensure that the government was clean and the Governance, Integrity and Anti-Corruption Centre (GIACC), an agency under the Prime Minister's Department, was formed to monitor new anti-graft measures.

At the executive level, Mahathir added, a special cabinet committee was formed to formulate anti-graft policies, which include improvements to the asset declaration system for government lawmakers, preventing politicians from sitting on GLC boards and a new mechanism to stop gifts to government officials or civil servants.

This committee also ordered all members of the government to stop issuing "support letters" and implemented the National Anti-Corruption Plan 2019-2023 (NACP), which was launched in January.

Mahathir said anti-corruption committees have been set up to monitor federal and state governments, ministries, agencies and departments to implement cabinet's anti-graft policies.

"Hopefully, Malaysia will become known for its integrity and not corruption," Mahathir (Harapan-Langkawi) said during question time, in response to Lim Kit Siang (Harapan-Iskandar Puteri) who sought an update on efforts to turn Malaysia's trajectory away from a kleptocracy.