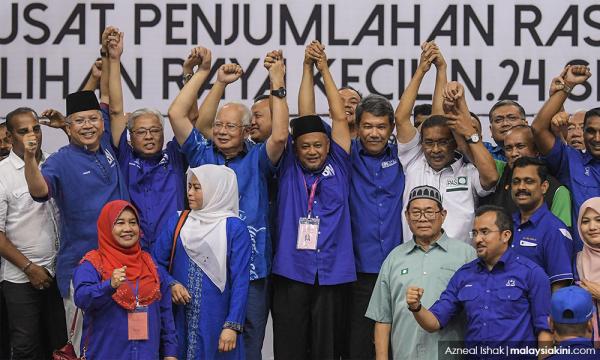 I was dead wrong about Semenyih

COMMENT | On Semenyih, my analysis went astray. I argued that the polls were wrong. Perhaps I was under the impression that a sample of 350 by Ilham Centre could not adequately project the behavioral trajectory of the voters.

More importantly, my analysis was skewed by my self-belief and the idea that the voters would know what is a clear right and wrong. Some did, some didn't. Those that didn't helped cross the threshold of 18,000 voters to deliver victory to BN/Umno.

Semenyih is not far from Kuala Lumpur or Putrajaya. It was my assumption the majority of the voters would choose to elect a state assemblyperson who would know how to manoeuvre his way through the machinery of the state and federal governments. Again, I was wrong.

Almost an equal share of voters split their votes between Pakatan Harapan and BN. But a majority of nearly 1,900 voters was based on the electoral support given by PAS to Umno and that is indeed the true swing.

P Gunasegaran argued that it was a swing of merely two percent from the Malay voters. This was enough to tip the scale against Harapan. Right or wrong, Malaysia now faces a dangerous future.

PAS and Umno have been lionised. Despite the slew of lawsuits against them, they seem to believe that they are invincible, as long as they can harp on issues of Islam and Malay rights and privileges.

It does not matter that this is organised hypocrisy of the worst kind, because the results in Semenyih show that Malays do want Harapan to walk the talk by sticking to the manifesto.

Thus, while the emotions may all be driven by the identity politics of Malay first and Islam, the heart of the issue is the increasing cost of living, which demands urgent attention. At the very least, they want a state assemblyperson who can look into their grouses, pain and pressures in life.

Harapan may not be able to respond quickly to such prosaic matters as yet. The previous administration of former premier Najib Abdul Razak has blown a hole in the finances of the current government.

With 1.3 million civil servants on the government's payroll, its hands are bound. That’s not even counting the retirement benefits which they would be entitled to one day.

There is so much the government of Prime Minister Dr Mahathir Mohammad could do, both in terms of subsidies and handouts.

Come what may, I will be more prudent and cautious in my analysis. But a professor once told me "No analysis is ever wrong if it was meant to challenge the other side to raise the ante."

The folks in Semenyih did the latter. Perhaps my eleventh hour article, written 24 hours before the by-election, somewhat tipped the balance albeit against my own analysis. That, in a way, was democracy in motion.

All the best to those who chose BN, Umno and PAS. If they stole before, they will steal again.

PHAR KIM BENG is a head teaching fellow on China and the Cultural Revolution at Harvard University.