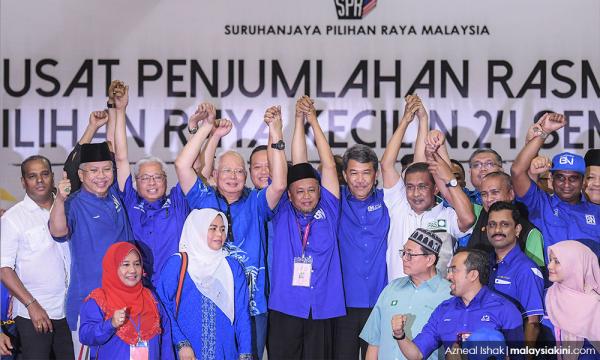 COMMENT | BN's victory in Semenyih was, amongst many things, unexpected to say the least. Although it has traditionally been a BN seat until the 14th general election, the numbers showed that even with PAS giving way to BN/Umno, Pakatan Harapan should still have enough votes to win the Selangor state seat.

Many analysts will pore over the data in Semenyih to find out what went wrong for Harapan and what went right for BN. Certainly, the perception that Harapan has not delivered on the Buku Harapan manifesto promises is one reason for the loss along with other failings and issues that plague the months old Harapan federal government.

But crucially, Semenyih is the second straight victory of the Umno-PAS alliance. By now, even the most moderate and centrist people within Umno would have had to concede that racial and religious rhetoric, in the guise of “Malay unity” is working.

If a swing such as the one in Semenyih was replicated at the national level, we will see Umno sweep back into power with PAS.

Even Umno leaders who do not usually pander to right-wing narratives have resorted to playing the race and religion card. BN secretary-general, Nazri Abdul Aziz, for example, equated the appointment of a non-Muslim chief justice, attorney-general and finance minister as “surrendering Malay rights” and that their oath of office are somehow not binding since it was not done before the Koran.

Acting Umno president Mohamad Hasan, too, was not above riling up racial and religious sentiments. He was reported to have said that the government was now filled with too many penumpang in an apparent reference to the number of non-Malay ministers in government.

Although more subtle than Nazri, what Tok Mat implied with the penumpang remark is the same; Malays are under threat with this Harapan government. The use of the word penumpang is not accidental; penumpang do not own the property they tumpang. Non-Malays, according to Tok Mat, do not own this country.

This sort of politics is toxic for the country. For the next few years, we are going to see every single issue be turned into a racial and religious one as Umno and PAS further entrench their political cooperation. From their perspective, this is their path to power and they will exploit it to the fullest.

We may have had the same party in power for 61 years until 2018 but for the most part it was a federal government that tried to be a government for all Malaysians. A government built on racial and religious sentiments will pander only to its electorate.

Yes, the government should improve the lives of citizens, fulfil its promises and ensure social justice. Cost of living issues must be addressed, no doubt. But at the same time, we cannot allow this rising tide of extreme right-wing politics to continue unchecked.

The fear is that if this tide becomes a tsunami, even with social justice achieved and manifestos implemented, it would matter little if people vote based on racial and religious considerations. This will not be a unique trend; the election of Donald Trump and populist right-wing leaders throughout the world is proof enough that this can be the case.

So what can be done to counter the racial and religious rhetoric? Not by pandering to the right-wing elements in society. Not by treading the path taken by those who seek to divide us.

We need a new national narrative; we need a message of inclusiveness that can unite us. We need a vision for this “new” Malaysia. A statement of intent of the sort of Malaysia we aspire this country to be. Not to renegotiate what has been in place, but a reiteration of the principles that our founding fathers (and mothers) built this federation upon.

I believe that this national narrative should be based on the following principles:

That we re-affirm that this country is for all Malaysians, irrespective or race, religion, creed, class, gender or sexual identity, political ideology and other differences. There is a place for all Malaysians under the Malaysian sun without exclusion.

That we will uphold the principles and the basic structure of the Federal Constitution, respect the rule of law and uphold fundamental freedoms of all Malaysians. Malaysia must be a sovereign democratic and independent state founded upon the principles of liberty and justice.

That we will ensure that no Malaysian will be left behind; no community will be marginalised or excluded for the development of the country. All Malaysians must be allowed and given the opportunity to realise his or her full potential as a citizen of this country with rights and responsibilities.

That for Malaysia to fully realise its full potential, all Malaysians must work together in order to face the challenges of a globalised world and to make this country a better place for all Malaysians. To work and strive with hand and brain to create a nation we can be proud of, inspired by the ideals of justice and liberty and be a, “… a beacon of light in a disturbed and distracted world”.

We should seek to realise the words of Tunku Abdul Rahman for this country to be a “[…] a sovereign democratic and independent state founded upon the principles of liberty and justice and ever seeking the welfare and happiness of its people and the maintenance of a just peace among all nations.”

We do not fight the flames of racism and sectarianism with fire but douse them with the uniting waters of a shared national identity with a shared destiny together. We are stronger together, not divided.