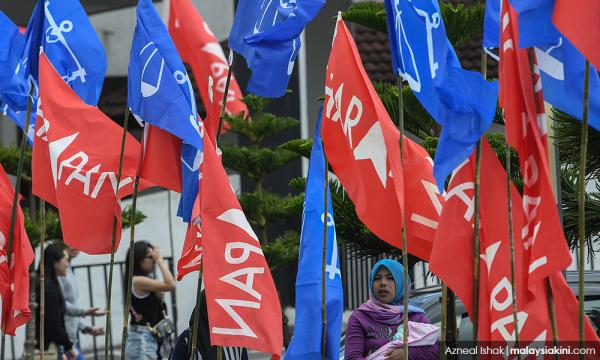 BN had controlled the seat since 1959 until the last general election.

Ilham Centre said the only way for Pakatan Harapan to retain the seat is if the "magic formula" - the same level of support and high turnout - seen during the last general election could be maintained.

The findings are based on a survey involving 378 voters. Carried out from Feb 26 to 28, it was done through random stratified sampling with an error rate of 2.15 percent.

Only 34.4 percent of the respondents accepted Harapan's candidate Muhammad Aiman Zainali. The centre also found that Harapan's campaign failed to promote him in an effective manner.

"All efforts by Aiman appear ineffective and (voters') attention is on the BN (candidate) Zakaria Hanafi. (Zakaria's) maturity as a candidate is used as a yardstick by voters," it said.

Aiman, 30, who is pursuing a PhD in electrical engineering, is the son-in-law of the late incumbent assemblyperson Bakthiar Mohd Nor. Whereas, Zakaria, 58, is a former university administrator and veteran Umno member.

Ilham Centre believed that Harapan's campaign was less organised than BN's and unable to create excitement among voters, save for the final round of rallies by Prime Minister Dr Mahathir Mohamad and PKR president Anwar Ibrahim.

"As an opposition, BN's focal point was Harapan's failure to fulfil its promises. Race and religious issues also completed BN's recipe to restore Malay support which was lost during the last general election," it added.

"We found that 56.6 percent (of respondents) agreed that Najib's campaign had a positive impact on the BN campaign," said the firm.

On PAS, Ilham Center said although the party was not as committed in criticising Harapan, unlike during the Cameron Highlands by-election campaign, some 84 percent of respondents who identified themselves as PAS supporters have pledged to vote BN.

"Malay-Muslim issues are their main motivation in (supporting BN). Moreover, there are instructions from the PAS leadership (to do so)," it added.

The centre also found that 73.3 percent of respondents' primary concerns for this by-election were national issues.

"Among questions that were posed to voters... include the Harapan government's announcement on highway toll rates...

"Some 61.4 percent of voters surveyed said they were not impressed by the announcement while the rest looked forward to it," it said.

Additionally, the centre discovered that 74.6 percent of respondents agreed when asked Harapan had failed to fulfil their election pledges and 58.7 percent agreed that the Harapan government failed to safeguard Malay-Muslim interests.