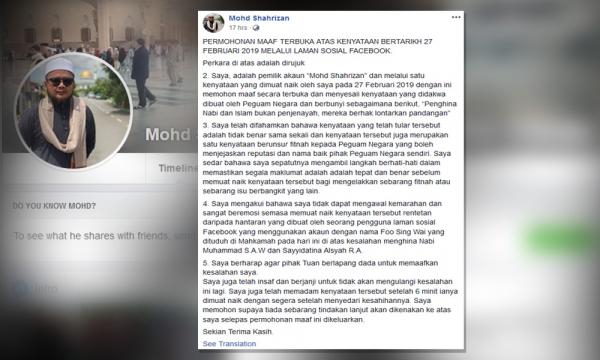 A Facebook user has apologised to Attorney-General Tommy Thomas for portraying the latter as an opponent of Islam in a posting.

Mohd Shahrizan said the posting was only up for six minutes before he took it down.

The apology came just hours after an aide to Thomas filed a police report yesterday over a claim circulating online which accused the AG of being anti-Islam.

In a Facebook posting yesterday, Sharizan said he wanted to apologise to Thomas after learning that a message he shared on his social media account was not true.

According to him, the post in question read: "Those who insult Islam and the Prophet are not criminals, they reserve the right to express their views". It was alleged that Thomas was the one who made this statement.

"I was made to understand that the statement, which had gone viral, was entirely untrue and it was also slanderous towards the AG, which could tarnish his reputation and good name.

"I realise that I should have been cautious to ensure all information was true before uploading the statement so as to prevent any slander or other issues," Shahrizan added.

The man further claimed that he had been unable to control his anger when publishing the statement, as he was emotional over a recent incident in which another netizen had allegedly insulted Prophet Muhammad and his wife.

Assuring that he would not repeat the mistake, Shahrizan asked Thomas not to take legal action against him.

Malaysiakini has learnt from a source within the Attorney-General's Chambers (AGC) that the police report lodged by Thomas' aide was not related to Shahrizan's posting.