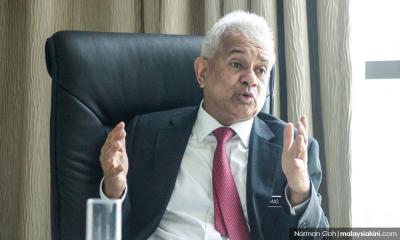 A police report has been lodged over a claim circulating on social media that Attorney-General Tommy Thomas is anti-Islam.

It is learned that the AG's special officer had filed the report at about 3.15pm with the Putrajaya district police headquarters.

Contacted later, Thomas, who confirmed lodging the report, said that he wanted the police to investigate the matter.

"There has been a vicious message circulating on social media claiming that I am anti-Islam.

"This is a total lie. It is for this reason, the police report was lodged for the matter to be investigated,” he told Malaysiakini.

The report comes in the wake of allegations from various quarters, including Umno and PAS, that the Attorney-General's Chambers (AGC) has not been firm with those accused of insulting Islam.

Yesterday, Inspector-General of Police Mohamad Fuzi Harun had also passed the buck to the AGC when responding to criticism over the release of a senior citizen who made a Facebook posting deemed insulting to Prophet Muhammad on police bail.

“We investigate, but we do not press charges, we rely on the deputy public prosecutors for further instructions and we will adhere to whatever instructions they give us,” he had said.

He is the second person to be charged with such an offence after A Taneson, 22, was produced in court in Shah Alam yesterday.

Over the weekend, BN secretary-general Nazri Abdul Aziz had remarked that Malays should not be faulted for thinking that the authorities are not prosecuting anyone in connection with the death of firefighter Muhammad Adib Mohd Kassim since the AG and the suspects are of the “same skin colour.”

According to the authorities, Adib, who died on Dec 17, was assaulted during last November's riot outside the Seafield Hindu temple.

Following this, Thomas and the Pakatan Harapan government have come under fire for not charging anyone in relation to the incident.

An inquest is ongoing to determine the cause of Adib's death.