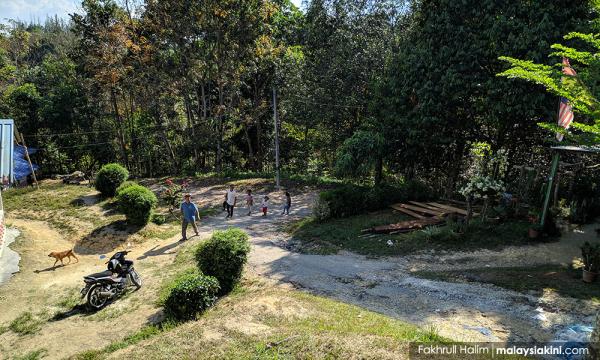 SEMENYIH POLLS | The Orang Asli settlement in Kampung Kachau Dalam is only 15 km from Semenyih town, but the journey takes a long time as it is only accessible via a dirt road.

The absence of good roads to the village pose a problem for the residents there, especially during a medical emergency.

Another concern of the Orang Asli community there is the status of the land as it has yet to be gazetted as Orang Asli native land, despite them having occupied the area for nearly 84 years.

Kampung Orang Asli Kachau Dalam Residents Association secretary Matzee Duman, 25, said although the Orang Asli community had been in the village since 1935, nothing much has been done to improve their living condition.

"We hope the authorities would act on our problems, the most urgent of which is the need for a tarred road. The only accessible road that we have is the dirt road and when it rains, it cannot be used and we are cut off from the outside world.

“Imagine the problem we face when we need medical treatment,” he said when met by Bernama.

On the land status, Matzee said they had raised the matter to the authority for it to be gazetted as Orang Asli native land.

“However, there has been no response so far. We have been staying here for so long and hope the matter will be resolved soon.

"We are worried because we are made to understand that the Area Farmers Organisation is acquiring the land,” he added.

“There is the Semenyih Health Clinic, but it is so far and the medical check-up schedules are also irregular. Sometimes it is once a month and sometimes once a week.

“If my child is sick, we have to wait. It is not easy for us to go out from the village to the clinic. If it rains, my child can get sick again,” she added.

It is learnt that Kampung Kachau Dalam is among 10 Orang Asli villages in the state constituency. There are about 200 people from 42 families staying there.

Semenyih is one of the two state constituencies in the Hulu Langat parliamentary constituency. The other is Dusun Tua.