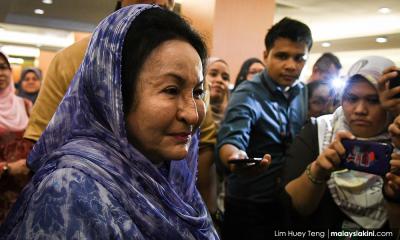 The High Court in Kuala Lumpur today agreed to defer the hearing of the Lebanese jeweller's suit against Rosmah Mansor, which was scheduled for March 4 and 5.

The new trial dates will be set after the freeze on items seized by the police expires.

Under Section 61 of the Anti-Money Laundering, Anti-Terrorism Financing and Proceeds from Unlawful Activities Act 2001, the authorities have 12 months to identify the ownership of seized items.

This means the police have until May this year to establish ownership of the items seized from properties linked to former premier Najib Abdul Razak during a raid on May 18, 2018.

The items included 12,000 pieces of jewellery, hundreds of handbags and millions of ringgit in cash.

Initially, Global Royalty Trading SAL's lawyers, led by David Gurupatham, wanted Judicial Commissioner Wong Chee Lin to maintain the March 4 and 5 trial dates, but Rosmah's lawyers, led by Rajivan Nambiar, requested a stay of proceedings pending confirmation that the 44 jewellery items are among those seized by the police.

Senior federal counsel S Narkunavathy told Wong that police have yet to complete investigations and it was proper to wait for the freeze period to end in May.

Following this, the judge agreed to vacate next month's hearing date and fixed May 24 for case management for the court to fix possible hearing dates.

Last July, the Lebanese company filed a suit against Rosmah to claim the 44 jewellery items worth more than US$14 million (RM60 million) it had sent to her for evaluation and purchase.

Last November, the investigating officer, Foo Wei Min, who is the head of the special investigation division of Bukit Aman's anti-money laundering team, said in an affidavit that the police have yet to conclusively determine if the said 44 pieces of jewellery are in the custody of the police and are part of the 12,000 jewellery items seized.

"I can only confirm that jewellery (items) were seized by our unit in May 2018.

"As to whether the 44 pieces of jewellery in this suit form part of the jewellery seized, we are not yet in a position to state on oath, as we still have until May 2019 to verify (the pieces), with the assistance of an expert adviser," he added.