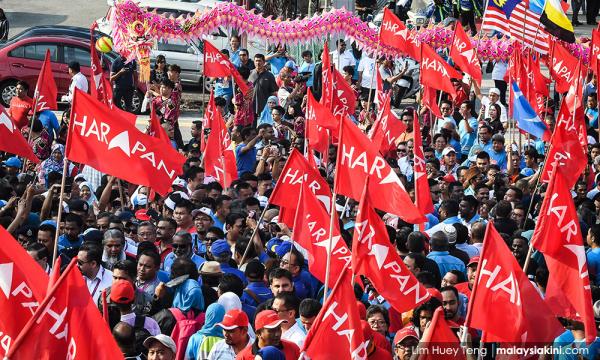 MP SPEAKS | There are three reasons why the voters of Semenyih should vote for the Pakatan Harapan candidate, Muhammad Aiman Zainali on Saturday, March 2, 2019.

On Saturday night, a former Umno minister, in a by-election ceramah questioned the appointment of non-Malays and non-Muslims as finance minister, attorney-general (AG), and chief justice (CJ).

This is extremism at its worst, against the very spirit of the Malaysian constitution and the principle of Malaysian nation-building.

It is not that Malaysia did not have a non-Malay and a non-Muslim as finance minister, AG and CJ in the past.

Is it wrong for a non-Malay and a non-Muslim to become a finance minister, AG and CJ?

The Malaysian constitution is very clear that these posts should be open to any Malaysian who is both qualified and competent to carry out the responsibility of the job.

Firstly, the voters of Semenyih should use their vote in the by-election this Saturday to demonstrate their disagreement and rejection of the extreme position of the former Umno minister who questioned the appointment of non-Malays and non-Muslims as the finance minister, AG and CJ.

Secondly, former premier Najib Abdul Razak (above) is trying to make a political comeback and as the Home Minister Muhyiddin Yassin intimated, return as the prime minister with his unashamed campaign of “Malu Apa Bossku.”

Many Malaysians are very disappointed that Najib, who had brought infamy and ignominy to Malaysia with his 1MDB as well as other 1MDB-liked corruption scandals in Felda, Felcra, Mara and Tabung Haji, turning Malaysia into an international butt of jokes as a global kleptocracy, is not paying for his corruption and crimes in Sungai Buloh Prison, but is allowed to strut all over the country in his “Malu Apa Bossku” campaign.

However, as a New Malaysia is committed to the restoration of the rule of law, Malaysians must learn to be patient to allow the legal process to take its course to bring the criminals and culprits to justice.

However, the March 2 by-election provides an excellent opportunity for the people of Semenyih to declare loud and clear they do not want Najib to make a political comeback and least of all, return as Malaysian prime minister.

The third reason why the people of Semenyih should vote for Harapan is to show their continued support for the Harapan agenda for a New Malaysia, where the country transforms itself from a global kleptocracy into a leading nation of integrity in the world; where there is restoration of democracy, rule of law, good governance; where Malaysia can become a world top-class nation in different fields of human endeavour, be an international model of how we can leverage on the assets and best qualities of the diverse races, religions, languages and cultures that meet in confluence in Malaysia, turning them into national strengths and assets instead of becoming weaknesses and liabilities.

Harapan promised structural and institutional changes to bring about a New Malaysia, but it is not possible to undo the 60-year mess of government wrongs, deviations and abuses of power in 100 days, a year or two, or even in one electoral cycle.