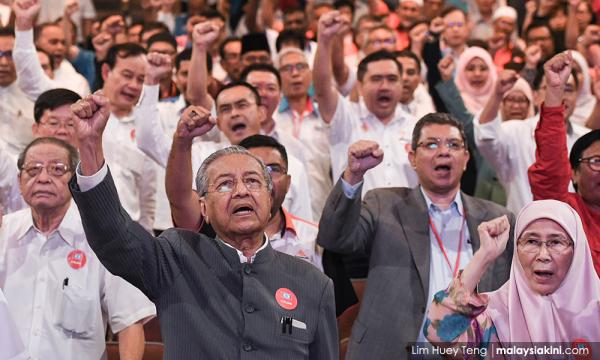 YOURSAY | ‘Fear of losing a fragile vote bank is no excuse to hold off on reforms.’

Harapan may lose GE15 if it pushes reforms too fast, Saddiq warns

David Dass: Youth and Sports Minister Syed Saddiq Syed Abdul Rahman was not specific as to which of the pledges set out in the Pakatan Harapan election manifesto cannot be implemented now.

PAS and Umno have come together to fight in GE15. And that will make the difference - or will it? It is hard to believe that two parties which push for race-based politics and policies and religious extremism will win.

What are most of the pledged reforms meant to do?

To improve governance; to reduce corruption; to make the Election Commission independent of politics; to strengthen democracy; to make key civil servants like the attorney-general, the MACC, the auditor-general and the Bank Negara governor answerable only to Parliament; to make the police force more professional and disciplined; to improve our education system; increase worker productivity and wages; ensure the independence and integrity of judges to make government policies and actions more just, fair, and inclusive, et cetera - in other words, to make reforms that would secure democracy, prevent waste and leakages, strengthen the economy, eliminate poverty, and generally make the government more effective, fair and just.

So, what are the reforms that cannot be made now, and why?

The government has four more years to prove to the Malays that their policies will produce better results than previous policies.

Poverty eradication, educational reform, and a clean government are essential. It is hard to believe that these reforms would cost the government the next election.

Newday: No, Syed Saddiq, we want promises kept and reforms to happen as soon as possible.

It is understood that some planning needs to go into the reforms, but unless we see some real action in the next six months, especially in education reform, you will lose any remaining goodwill out there.

TCM: Syed Saddiq, for once I agree with you. Slow reforms are still better than no reforms. The understanding of the overall political landscape is crucial for the survival of the current government and hence, our best bet for long-term reforms.

Do it slow by all means, but show some results by picking the low-hanging fruits first, perhaps.

For those who keep threatening to vote the current government out in GE15, I ask this: “Is our memory so shallow that we think that the other side would even entertain the thought of reforms?”

Give them a chance and do not fall into the trap of the opposition to attack at every opportunity. Criticise constructively. Otherwise, we will only slow the government down.

Now Umno and PAS are united, there will be fewer split votes. Just combine votes for PAS and Umno in GE14 and see how many seats Harapan would have won.

It's all about racial politics in this country, so we have to tread carefully knowing some people are very sensitive to changes. We just need to be patient and pray for the best.

Quigonbond: First of all, what is "too fast"? Most people wouldn't consider nine months too fast. You can already make a baby in that time.

If it is, please enlighten the public by showing us progress. You may find us very understanding if we know you are making progress and in the right direction. What we fear is silence.

Second, why cast a blanket approach over all reforms? Thirdly, it's more the case of some Harapan leaders not walking the talk, like political appointments to government-linked companies (GLCs).

Making certain ministers and menteris besar answer for dishonesty over their degree isn't going to cost you the next general election.

So please go on and tell us what else you are planning to go slow on (maybe we have an idea about how to speed things up). If you don't, we are well within our rights to assume that you are going slow because of self-interest.

Clever Voter: Not changing or at least reforming the corrupt patronage system is a lousy excuse.

Feudalism and rent-seeking behaviour are rampant and still thriving in many parts of the economy. Harapan lacks the guts to push for change simply because of the fear of losing its fragile vote bank.

In many instances, we see the continuation of such a bad system as a result of apathy or a lack of will to introduce real change.

Syed Saddiq was part of a new generation that advocated for change, and for many who listened to his U-turn, it is simply disappointing. Syed Saddiq needs no reminder that change takes time, and he could at least give a more intelligent answer.

Roger_5201: Dear Syed Saddiq, doing nothing is also not an option.

Harapan has reneged from something as simple as recognising the Unified Examination Certificate (UEC) to ratifying the International Convention on the Elimination of All Forms of Racial Discrimination (Icerd).

Why bother with the GE14 manifesto if you never intended to keep it?

Mahu See Lui: Push for reforms now while you still have four years for them to take effect. You may well lose some electoral support, but at least the job is done for the good of the nation. That's what you have been elected to do, instead of looking towards the next election.

There is no guarantee that you will win in the next election, and if reforms promised have not been effected by then, the state of the nation will worsen.

If not, you would have wasted five years and destroyed the aspirations of Malaysians who elected you. Stop thinking of the next election and start doing what you promised.

You are already thinking of protecting yourself even before you have done anything substantial. No wonder, the people are disappointed with Harapan.