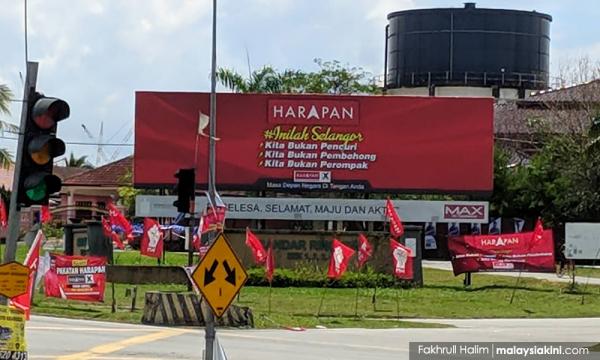 SEMENYIH POLLS | The ongoing by-election is witnessing heavy campaigning in areas where 70 percent of the voters are Malays.

But in the three Chinese-majority polling districts, campaigning has been less intense. Here, over the past six days, political heavyweights were rarely seen out on the stump.

This imbalance in the campaign activities could be attributed to the fact that the majority of the Chinese are firmly behind Pakatan Harapan led by Dr Mahathir Mohamad.

A Merdeka Center survey showed that 95 percent of the Chinese voted for Harapan, compared with only 20 to 30 percent for Malays in the 2018 general election.

The five by-elections that took place in the nine months of Harapan's administration also showed a similar voting trend in Chinese votes.

While the Chinese in Semenyih are small in population - comprising only 16.8 percent of the total voters - they were significant in helping Harapan crush the BN fortress in Semenyih in the 2018 general election (GE14).

Take, for example, the Kampung Bahru Semenyih polling district. It has 3,211 voters, with 83 percent of them being Chinese. Close to 81 percent of the voters supported Harapan in GE14.

However, with the growing trust deficit against the Harapan administration due to Putrajaya's inability to honour its election promises and the row over academic credentials involving Harapan leaders, will the Chinese voters in Semenyih still firmly back Harapan?

A Vox Pop conducted by Malaysiakini found that the Chinese voters are divided in their support for Harapan...