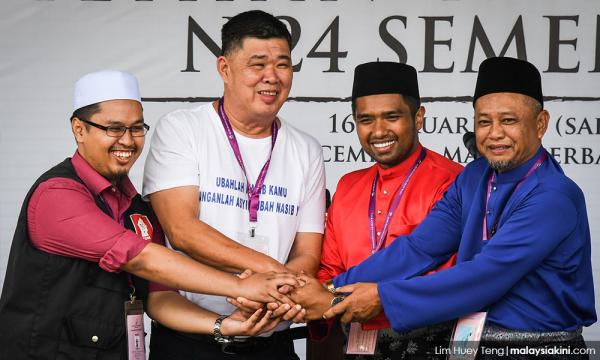 SEMENYIH POLLS | Bersih has cancelled the proposed debate between Semenyih by-election candidates, scheduled to be held on Feb 25.

In a statement today, the electoral watchdog's steering committee cited the non-participation of Zakaria Hanafi and Muhammad Aiman Zainali, who are the BN and Pakatan Harapan candidates respectively, in the debate as the reason for the cancellation.

"The two who accepted our invitation are PSM candidate Nik Aziz Afiq Abdul and independent Kuan Chee Heng, while the BN and Harapan candidates have rejected our invite.

"We decided that it would not be meaningful for us to continue with the debate which would have been aired live on national TV, without the participation of the candidates from the two main coalitions in the country," said the statement.

Bersih further thanked Nik Aziz and Kuan for accepting the invitation, but expressed disappointment with the two others who rejected it.

"Their refusal to debate raises questions of their suitability to represent the people of Semenyih, as one of the key criteria to be an elected representative, is the ability to debate in the state assembly."

Earlier today, Zakaria said the reason he rejected Bersih's debate invitation was it would not help him to solve the people's problem.

He further claimed that such debates were all about gaining popularity.

Aiman, meanwhile, had said that he would not join the debate as his main contender from BN was not joining as well.

Bersih pointed out that those aspiring to become elected representatives must have the courage to be scrutinised as a public speaker, and on positions they take on issues and policies.

"Bersih does not suggest that both Aiman and Zakaria are cowardly, or are lacking in debating skills, but many Semenyih voters who are unable to attend their local ceramah, would not be able to judge them otherwise.

"Had they joined the debate, they would have had the opportunity to speak to at least a million Malaysians, including tens of thousands of Semenyih voters," said the electoral group, citing the close to 750,000 viewers who tuned in to TV1 alone, for the debate between the Cameron Highlands by-election candidates.

Bersih further questioned whether the excuse given by Aiman for not accepting the debate offer is tantamount to insulting the PSM and independent candidates who offered to join it.

"Harapan, as the ruling coalition, should demonstrate leadership by doing what is right instead of allowing BN's move to dictate what they do, or do not do," it said.

In politics, political debates between contenders are the way to go, as other conventional events like dinners, free concerts, lucky draws and handouts, run the risk of violating the Election Offences Act 1954, added the electoral watchdog.

Regardless of the cancellation, Bersih said it looks forward to future by-elections, particularly the upcoming Rantau polls, to hold a debate.

"We hope acting Umno president Mohamad Hasan would seize the opportunity to debate and herald in a new era of mature politics for BN under his leadership, and when he does take up the challenge, Harapan would not refuse."

When asked to respond to the remarks by Bersih, Aiman declined to comment.