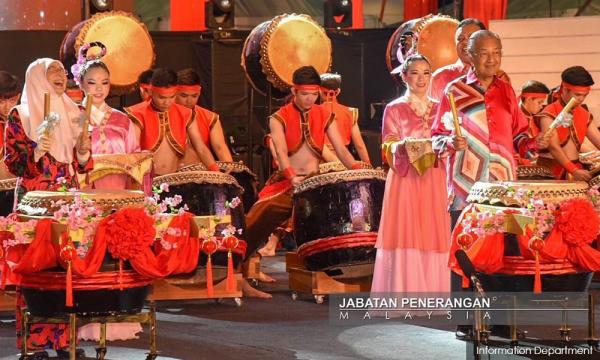 Tolerance is key to development and peace in M'sia - Dr M

Tolerance, as practised by all Malaysians, is the key to development and peace in the country, Prime Minister Dr Mahathir Mohamad said yesterday.

Despite being a multi-racial and multi-religious country, he said people in Malaysia were not hostile towards each other, but are cooperative in celebrating their cultural and religious festivals together.

“The number of people attending this Chinese New Year open house tonight, for example, is proof that the good relationship among Malaysians is not only visible at the top leadership level, but also among the people from all walks of life.

“Celebrating the cultural or religious festival of others doesn’t mean that we have to change our religion. In fact, it is permitted by religion. That is why we can live in peace and harmony and our country can be developed.

“Whereas in other countries, we can see that even though the people are believers of the same religion with only a minor difference in their interpretations, they still cannot live in peace and harmony, hence the occurrence of war and people being killed and injured... their countries are crippled by rockets and bomb attacks.”

Mahathir said this when launching the national-level CNY Open House 2019 at Dataran Centrio in Seremban last night, which was also attended by his wife, Dr Siti Hasmah Mohd Ali.

Mahathir called on the people to strengthen unity and continue practising racial and religious tolerance.

“We have actually gained a huge benefit for having a multiracial society because it has become the reason why we can claim ourselves to be 'Truly Asia', and even the world has recognised us as Malaysia Truly Asia.

“We hope the multiracial people and their contributions to our cultures, our languages and our economy will enable our country to be a fully developed nation.

"What is needed is for us to maintain peace so that we can work and contribute to our nation’s development in various ways,” he said.

The prime minister said that peace and prosperity enjoyed by the people today had enabled them to contribute to the country's development more rapidly compared to other countries.

“That is why all Malaysians must be grateful, not because we have other races and religions in our country, but because we live in peace and harmony and develop the country in our respective ways,” he said.

Apart from being served with various types of Malaysian traditional dishes and delicacies, the guests were also entertained by the traditional 24-season drum performance and lion dance by the world champion Muar Lion Dance Troupe.

Mahathir also joined the other distinguished guests in beating the drums, symbolising the launch of the event.

The open house was organised by the Ministry of Tourism, Arts and Culture, with the cooperation of the Negeri Sembilan state government.