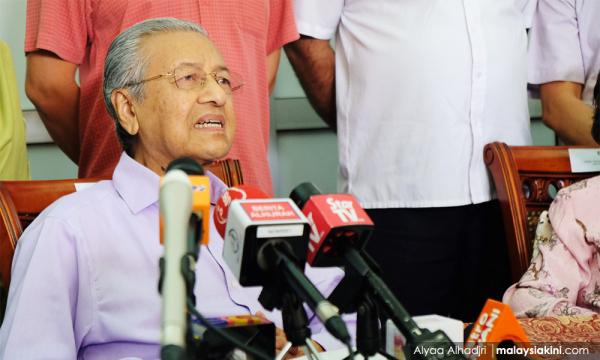 Yoursay: Is a Harapan win in Semenyih worth a trade-off with PAS?

YOURSAY | ‘If Mahathir feels that this deal was hatched out of pragmatism, then he has to explain himself.’

Monty: I am finding it difficult to comprehend the significance of this assurance by PAS president Abdul Hadi Awang that his party will not back BN in the upcoming Semenyih by-election, and why Prime Minister Dr Mahathir Mohamad needs to harp on this issue for two days in a row now.

Hadi has been proven to be an unscrupulous person, capable of asking his underlings to lie for him. Does this mean that Mahathir and Harapan will be beholden to Hadi and PAS if they win in Semenyih?

Clever Voter: It is hard to trust any politician these days. PAS support is significant to BN. Without the few thousands of votes that they can provide, BN will not win in Semenyih.

Mahathir knows this. But it's a bad deal. Why win a local seat with trade-offs with PAS, a party with zero moral values?

Harapan has to speed up its reform process, including fixing its own internal issues. Never mind the black shoes and fake qualifications, there are plenty of economic and social issues to be addressed.

Transforming the social fabric is never easy, if not near impossible. But giving in to PAS should not be an option. If Mahathir feels that this pragmatism, then he has to explain. This is the other problem.

Anonymous 0123456789: Is this the kind of democracy that we want? Arm-twisting and blackmail by the powerful? Aren’t these considered election offences? Over to you, Election Commission.

In any case, the agreement hatched between Mahathir and the three PAS leaders raises so many questions. Mahathir inadvertently admitted that he and Hadi have one common enemy, DAP.

Meaning that Mahathir will also agree for PAS to support Umno whenever DAP is against Umno. One pertinent question for the DAP is whether they will back Bersatu in the Semenyih by-election after being backstabbed by Mahathir.

Flying Eagle: Mahathir, if it is true that there is a written agreement between you and PAS secretary-general Takiyuddin Hassan that the party will not cooperate with Umno in Semenyih, then please show us the agreement. Don’t just talk. Actions speak louder than words.

Anonymous 080: Between the two liars, what else do you expect? PKR, DAP, Amanah and Warisan are watching as matters unfold and threaten their very survival. Aren't they concerned?

The government is gonna be paralysed with every by-election. The lame duck syndrome prevails.

To God The Glory: If the coalition partners of Bersatu want to prevent the haemorrhaging of votes from their own party, they must be courageous and direct with Mahathir. Tell him they would look foolish to help a party that is causing them to lose support.

Fernz: Mahathir is right. Between Umno and Bersatu, PAS will remain neutral. Hadi should be stripped of his MP’s seat for violating his oath to uphold, honour and respect the constitution by what he appears to have done here.

The Orang Asal must reject Malay race-based parties and Mahathir. Otherwise, they will be played out again for the next 60 years.

Indians in Malaya were not acknowledged until 300,000 people took to the streets in Kuala Lumpur on Nov 25, 2007 in a makkal sakthi (people power) uprising engineered by Hindraf. If Umno and PAS threaten another May 13, Indians should threaten another Nov 25.

'PAS and Umno still friends, but Semenyih commitment won't be like in Cameron'

Kim Quek: This statement from Takiyuddin practically confirms that Hadi has agreed to back off in the coming Semenyih by-election. Further, the written agreement is a virtual commitment from Hadi to back Mahathir all the way from now on.

Is this the high price Hadi had to pay for Mahathir to let go of PAS’ RM90 million corruption scandal? The evidence of the alleged RM90 million from Umno must be mighty strong for Hadi to eat humble pie like this.

On the other hand, this is another blow to Mahathir’s oft-repeated boast of his commitment to restore the rule of law to the country – which also happens to be Pakatan Harapan’s pledge to the electorate pre-GE14.

Fairview: This is like a man dating two different women, telling one he won’t sleep with the other, and telling the other that he is just having a friendly chit-chat with the former. If the two women persist in courting this man, they deserve to be played out.

Durian: Takiyuddin just stated the reasons for DAP’s loss in Cameron Highlands. It has nothing to do with Umno’s revival or no trust in Harapan.

It was a racist plot to ensure a DAP non-Malay would not win. Hence there was no sincere attempt to counter the racist propaganda seen in the campaign.

Bersatu has something up their sleeve for it to explain the seven MPs from Umno who joined the party after Cameron Highlands. The timing is suspicious.

Semenyih will be a different ball game, however, and Harapan will win. Even if DAP don’t campaign hard, Chinese and Indian votes will not go to Umno and PAS.

Jedi Yoda: All that can be concluded of this sorry saga is that PAS is being deceptive – their commitment is always a yes or no, depending on how you read them.

What sort of a commitment is it when you only bring a sample letter to meet the prime minister.

And only these three leaders say they are supporting Mahathir, but the rank and file are doing the exact opposite.