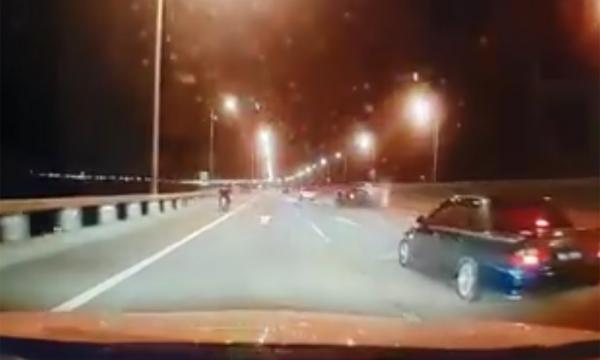 A former hairdressing saloon employee pleaded not guilty at the Bukit Mertajam Magistrate’s Court today on a charge of reckless driving which caused the death of Moey Yun Peng, whose car plunged into the sea at Penang Bridge on Jan 20.

K Vaitheswaran, 21, made the plea after the charge was read in Tamil before Magistrate Jamaliah Abd Manap.

The man, who was driving the Toyota Vios in the accident, was accused of causing the death of his friend, a private college student at Kilometre 4.0 of the Penang Bridge heading towards Perai about 3am on that day.

The accused who was seen keeping his head down during the proceedings, faces a maximum jail term of 10 years and a fine of up to RM20,000, under Section 41 (1) of the Road Transport Act 1987, if found guilty.

Earlier, the deputy public prosecutor, who is also the state prosecution director, Yusaini Amer Abdul Karim, sought the court to impose bail of RM10,000 in one surety based on the seriousness of the accused's offence.

However, counsel S Parameswaran, representing the accused, pleaded for a lower bail as his client is no longer working.

“Apart from that, the accused is living with his parents, and his father is an electrician with a monthly income of RM2,500 while his mother is a housewife,” he said.

The lawyer later asked bail to be reduced to RM5,000 as there was no reason for the accused to abscond and his client has been cooperating with police in the investigation.

The court later set bail at RM7,000 in one surety and fixed March 18 for case mention.

In the incident, the Mazda CX-5 sports utility vehicle (SUV) driven by Moey, plunged into the sea after the car collided with the Vios driven by Vaitheswaran.

Efforts to retrieve the vehicle and Moey's body from the seabed took more than 24 hours before it was hoisted on Tuesday, Jan 22.