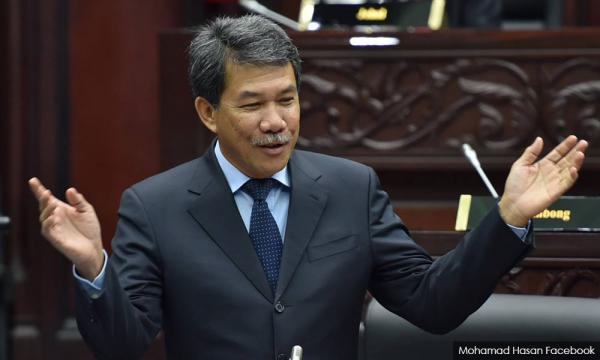 The political arrogance of Mohamad Hasan

COMMENT | Recently, Umno acting president Mohamad Hasan said there was no BN supreme council meeting because MCA and MIC were afraid to be questioned by journalists on the motion to dissolve the BN coalition.

Is Umno continuing to behave like a bully? Umno is no longer strong like it used to be. MIC leaders are still silent on this for fear that it will offend Umno.

MIC must speak up. It cannot be allowed to be used as another tool for Umno. Don’t just bow, nod and say “yes” to Umno.

MIC can be an effective voice of the Indians and opposition. Focus on issues and criticise factually and constructively.

Interestingly, MCA president Wee Ka Siong had the “guts” to say that he was waiting for the BN supreme council meeting to be held at the soonest.

Wee and the MCA’s central committee had decided at the party’s AGM to dissolve BN and to form a new alliance.

Last year, Mohamad told MCA to leave the BN instead of seeking to dissolve it. Probably, Umno has begun to “show off” after winning Cameron Highlands by-election.

This is not the first time Mohamad had belittled MCA and MIC. A few years ago, as the menteri besar of Negeri Sembilan, he said Umno-BN can still survive without the help of MCA, Gerakan and MIC and there was no need to give any seats to its component parties in Negeri Sembilan...