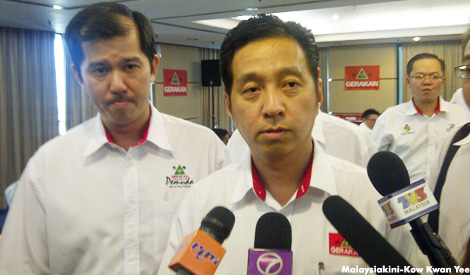 DAP advisor Lim Kit Siang's reported remarks that the feelings of the Malays must be taken into account regarding the recognition of the Unified Examination Certificate (UEC) has irked a Gerakan leader.

Kit Siang, who is the Iskandar Puteri MP, had made the remarks on Feb 6 in Kuala Lumpur, as reported by Chinese media.

Gerakan deputy president Oh Tong Keong expressed his regret over Lim's statement, and urged the party and its leaders to fulfil their election promises instead of "finding excuses" not to do it.

"The recognition of the UEC was part of the Pakatan Harapan GE14 manifesto.

"In order to canvass for support at the time, Harapan promised the Chinese community that once they become the federal government, they will recognise the UEC immediately.

“But it has been nine months since the May 9 election and yet they are still finding all sorts of excuses to postpone this pledge.

"It is obvious that they do not plan to keep their end of the bargain,” Oh said in a statement today.

The UEC recognition has been a thorn in the flesh of the Chinese community who have been actively campaigning for the issue at every national polls.

However, Kit Siang had reportedly said that the UEC may be recognised before GE15, and that Harapan did not say in its manifesto that it would acknowledge the exam within 100 days of rule.

Last month, DAP secretary-general Lim Guan Eng said the government had set up a multiracial committee to deal with matters arising in the UEC recognition to prevent the misunderstanding the various communities.

Meanwhile, Oh took Harapan leaders to task for often using "Malay objection" as a common reason not to recognise the UEC.

Harapan leaders say now is not the time to recognise the exams, and urged the Chinese community to wait for the move, Oh pointed out.

"Whether the Malays object or not, such claim is only made by Harapan leaders,” he said, adding that the government should organise an awareness campaign on the reasons behind recognising the UEC and what benefit its recognition will bring to the country, instead of postponing the recognition indefinitely.

"Deliver your promises instead of delaying it or else this is akin to cheating the people and hoodwinking the votes given by the Chinese community," Oh said.

He added that if the Harapan government is unwilling to recognise the UEC, it should have openly announced it does not plan to do so instead of repeatedly postponing and "giving false hopes" to the people.

"Sometimes they say the manifesto is not a Bible, sometimes the feelings of the Malays must be taken into consideration.

"So who can take care of the Chinese voters, since the Chinese have given Harapan 90 percent support, is this acceptable to the Chinese community?" the Gerakan man asked.