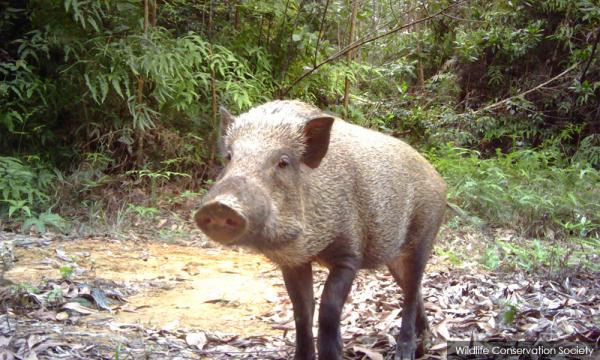 COMMENT | In my office are three pigs. Not the fabled Three Little Pigs persecuted by the Big Bad Wolf huffing and puffing, but three humans who are born in the Chinese Zodiac “Year of the Pig”. They are all from the same human family.

In 2019, the dad will be 48 years old, the mum 36, and the child, 12. One could call them “wild pigs” and they would not take offence as they are certainly inclined towards nature and on weekends are out there watching birds, trekking the hills and also taking wonderful nature and wildlife photographs.

In the last few days, I have been reminded in different ways that the Year of the Pig is coming up. In discussions with other conservationists, the wild pig keeps popping up as a species in need of greater protection from poachers.

A question often asked is, why would you want to protect wild pigs? After all, they breed quite readily, they are relatively common and sometimes they are even pests destroying farm crops in some areas.

The reality is that the survival of tigers is likely linked to the availability of wild pigs. In printed literature, as recently as the early 1960s, Malaysia had its full complement of ungulates (herbivores with hooves).

This plethora of hooved creatures ranged dramatically in size, starting with the large Sumatran rhinoceros, gaur and banteng and then, in decreasing size, the tapir, sambar deer, bearded pig, common wild pig, muntjac and the diminutive species of mouse deer.

Sadly, in Malaysia, some of these animals have become extinct, such as the Sumatran rhinoceros (photo, below) and banteng. Meanwhile, the gaur and sambar have become extremely rare and very restricted in their range. Discussions with forest rangers indicate that during the course of their career, gaur and sambar deer, once commonly seen in the 1970s, have become much more difficult to spot. Herds of gaur were even seen in open areas in Krau and Taman Negara in the 1970s.

However, in the late 2000s, sambar deer and muntjac had been so heavily hunted that a hunting moratorium was declared to save these animals. The moratorium still exists today and both species are showing small signs of recovery as they are now more commonly seen in camera-traps, as opposed to those years of the late 2000s.

A critical part of any equation to save the tigers, apart from reducing poaching and ensuring that a large expanse of tiger-friendly forest exists, is the persistence of prey. Tigers eat meat and their preferred prey are large ungulates as these provide more meat from each kill. For a female tiger with young cubs, the greater amount of meat makes it much easier to feed the dependent family. A tigress with three or four sub-adult cubs simply cannot kill enough muntjac to keep her family fed.

Taking larger prey, the mother tiger is also able to spend more time with her cubs, protecting them from potential predators in the landscape (leopards, bears, and even male tigers). Thus, an absent or inadequate population of large ungulates can suppress or prevent females from successfully raising cubs, as argued by prominent tiger biologists from India and Russia.

For the long-term health of the tiger population, large ungulates such as the gaur (range of weight between 650-900kg), sambar (180-260kg) and even bearded pigs (57-83 kg) and common wild pigs (<100kg) have to survive and proliferate. The smaller muntjac (20-28kg) would offer a meal, but would probably be considered just a useful snack. An individual tiger might be able to make a living off smaller ungulates like the muntjac, but the successful rearing of cubs is unlikely.

The “tiger” has been mentioned by key people in public many times - as a descriptor and an actual endangered species. It was brought up as an economic term, as in “tiger economy” by our new prime minister in 2018. More recently, during his visit to Oxford University, the prime minister mentioned the tiger as an important species to save.

Meanwhile, our Water, Land and Natural Resources Minister has been talking about tiger conservation and rallying the people he is in contact with on the importance of this animal not just because of biodiversity, but because of our heritage.

Indeed, tigers are on the Malaysian coat-of-arms and historically, have been a part of our cultural heritage. The tiger made its appearance on the state of Johor’s coat-of-arms during the reign of Sultan Abu Bakar (1862-1895) and more recently in 1994 when the Royal Malaysian Police included a tiger in its coat-of-arms. But how do cultural heritage, historical significance and rhetoric translate into the conservation of this endangered species?

The preference of tigers for different prey species has been studied from Russia to India to Sumatra. Perhaps surprising to some, wild pigs turn out to be, on average, the most preferred prey of tigers (as reported by Hayward and others, in their studies on prey preferences by tigers in 2012).

Large deer, like the sambar, come in a close second. We don’t know why tigers like pigs – whether they are preferred because they are easier to hunt, or perhaps just taste better. But we do know that when tigers have a choice, they choose pigs.

Given this knowledge, where do we go from here? Well, aside from protecting tigers themselves and the forest habitat they desperately need, the next most important thing we can do is to make sure there are lots of pigs out there to keep tigers, and their young, well-fed. If we want to save the tigers, we need to save the pigs.

Thus, we need to make sure that these wild pigs are out there in our forests and not hunted down by poachers, sold by nefarious eateries and eaten by consumers with exotic tastes. One of the ways to do so would be to include wild pigs in the existing moratorium on the sambar and muntjac and to include all forests as no-hunting zones for these animals.

The moratorium will serve two purposes: it can bring back the wild pig population and expand their range. When these animals have a greater chance of survival, they have a greater chance to become bulkier and heavier. For this argument, just ask the anglers what happens when one over-fishes. The fish get smaller and one can see this in even the weigh-ins during sport fishing.

We definitely do need bulkier wild pigs roaming our forests. We also need them to be easier to find by the predator, the tiger. This means increasing their densities in the forest.

The other effect of a moratorium is an administrative one for enforcement. During the moratorium period, enforcement teams would not have to bother with “chain-of-custody” of the hunted wild pig. Anyone caught in possession of a wild pig within the moratorium would thus be guilty of committing a crime.

Similarly, those caught hunting outside the moratorium period (i.e., the time when hunting is allowed) would be let off, but in a no-hunting zone, they would be guilty of a crime.

In a positive, open discussion with various NGOs involved in tiger conservation recently, the director-general of the Department of Wildlife and National Parks indicated that “the department will explore the options of having limited hunting periods each year for wild pigs and also of expanding no-hunting areas in Peninsular Malaysia”.

The Chinese Year of the Pig has the potential for positive cascading conservation effects on tigers. To protect and future-proof our country with tigers, we need to start protecting our wild pigs from major losses throughout their range.

My hope is that once the next Year of the Pig comes round in 2031, we will continue to see my friends, the three human pigs growing happily in their family unit, and for the actual wild pigs in our forests retaining a strong foothold in the wild as part of the assemblage of prey that helps bring back our Malaysian tigers.