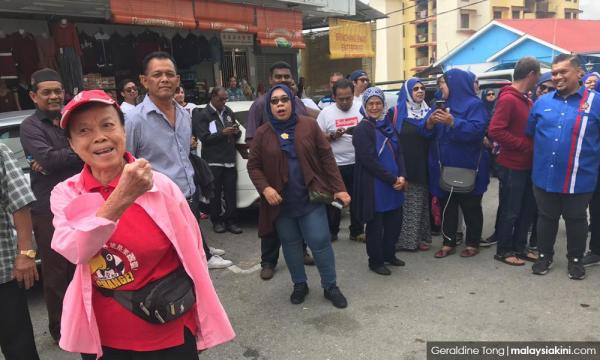 CAMERON POLLS | A group of BN supporters stopped a few people carrying flags with the Pakatan Harapan logo from going too near the polling centre at SJK (C) Brinchang.

Those holding the flags were following DAP veteran Lim Kit Siang, who told reporters he is merely walking around.

When Lim and his entourage passed BN supporters gathered further up the road from the school, they were heckled and had insults shouted at them.

As the people holding the flags strayed past the 50m no-campaigning zone around the polling station, the BN supporters went up to them, shouting at them not to campaign, and tried to snatch the flags away.

Lim, who was dressed in a light pink shirt and brown slacks, coolly proceeded to his car as the people with the flags immediately stopped and walked back the way they came, joining the group of BN supporters further up the road.

“We are following the rule of law here... if you don’t know how to respect the law, don’t become the government,” Umno supreme council member Armand Azha Abu Hanifah (photo) later told the Harapan supporters.

A 78-year-old woman, Tow Ah Mei, wearing a light pink shirt over a DAP Impian Sarawak T-shirt, then became involved in a war of words with the BN supporters.

“Who is right or wrong, Allah will know,” she said, holding her hands up to the sky.

A man wearing a red jacket approached Tow to tease her, “Dia (Allah) kasi sokong sama you mah (He is supporting you)."

“Auntie, auntie,” he later chanted at her mockingly.

The BN supporters, dressed in BN blue, with some sporting the logo on the chest, also began teasing and yelling back at her.

“No manners (kurang ajar),” Tow shouted back, as a number of BN supporters used their phones to record the exchange.

Najib: It is a 'people's victory'