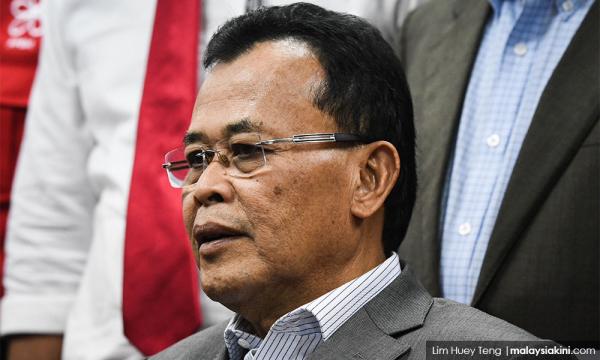 Osman strikes back on alleged trespass with Dr M’s backing

Johor Menteri Besar Osman Sapian said today that he had the right not to inform either Singapore or Putrajaya of his visit to the Johor Straits aboard a Maritime Department vessel.

According to Harian Metro, Osman said this after Prime Minister Dr Mahathir Mohamad told the Oxford Union yesterday that the menteri besar had not entered Singapore waters during his visit.

“Well, the menteri besar went without our permission. He thought that it was Johor's waters, that’s why he went there.

“I mean the reaction to his going there (from Singapore) is quite severe, as if you are going to war. I mean, he is going in a ship into neutral waters,” he said.

After a student at the session responded by saying that those were not neutral waters and were not even claimed by Malaysia in its 1979 boundary map – that Singapore does not recognise – Mahathir nevertheless stuck to his position.

Harian Metro also reported Osman as saying that he agrees with Mahathir’s statement, and reiterating that he did not trespass into Singaporean territory.

“On the question of not getting permission, I am the head of state government… those are Johor waters. Although subject to the federal government, I have a right not to inform them because this is my territory.

“Suppose I want to visit a Johor district, do I need to inform the Home Ministry? So in my opinion, there is a contradiction in the statement made by the Foreign Ministry,” he reportedly said.

Osman added that he also had the right not to inform Singapore of his visit.

The republic also called off the 14th Joint Ministerial Committee for Iskandar Malaysia (JMCIM) meeting, saying that it is untenable in light of the alleged incursion.

The waters off Tuas are currently a subject of territorial dispute between Malaysia and Singapore.

Unlike other parts of the Johor Straits, the boundary between Malaysia and Singapore near Tuas has yet to be clearly defined, and both countries have made overlapping territorial claims.

Osman had previously denied intruding into Singaporean territory, saying that his visit was not intended to be provocative, but was merely to observe Malaysian security forces at work.

He had also claimed that the Foreign Ministry was aware of his visit. The ministry later clarified, however, that it had immediately and repeatedly tried to contact Osman’s office to advise him not to proceed.

'No federal-state coordination on national interest'

"The foreign minister should have just mentioned that Wisma Putra did not give permission to Osman to do what he did.

"The need to elaborate was not necessary, even if this was a Malaysia Baru initiative to create awareness on the notion of being completely transparent with the public," he said in a statement.

Ikmal Hazlan further claimed that efforts to defend the nation's sovereignty could fail due to leaders' public difference of opinions on the matter.

It was feared that Osman’s visit could undermine the positive outcome of a meeting between Foreign Minister Saifuddin Abdullah and his Singaporean counterpart Vivian Balakrishnan just a day prior.

Wisma Putra said that when Osman was contacted, he was already onboard the vessel and en route to the Johor Bahru port.