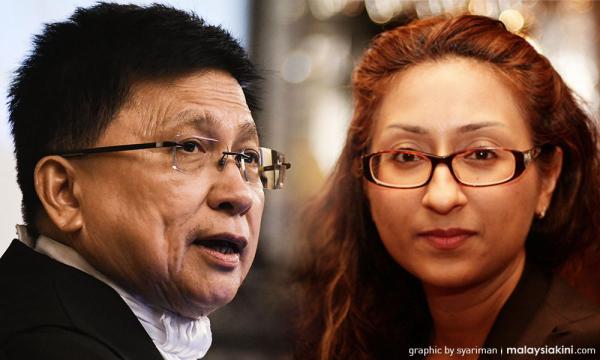 Chief Justice Richard Malanjum will file an affidavit-in-reply to the legal suit filed by the late Karpal Singh’s daughter in connection with the alleged interference by the judiciary in the outcome of her father’s sedition case and on the religious conversion of three Hindu children.

Malanjum said he would respond to the suit by lawyer Sangeet Kaur Deo.

“Definitely, we have to file the affidavit... that’s the order (from High Court),” he said when met by reporters after opening the Legal Year for the Sabah and Sarawak Court at the Kota Kinabalu Court Complex in Kota Kinabalu today.

Asked when the affidavit would be filed, he said: “I have to follow the court order. I think three or five weeks. It would be handled by the Attorney-General’s Chambers."

Malanjum has been ordered by the High Court in Kuala Lumpur to file an affidavit-in-reply to an originating summons filed by Sangeet Kaur over the alleged interference by the judiciary in the outcome of her father’s sedition case and on the religious conversion of the Hindu children.

The order was made by judge Mohd Firuz Jaffril when the case came up for mention for the first time yesterday.

Malanjum was ordered to file the affidavit in reply on or before Feb 11.

Sangeet filed the summons on Jan 14 seeking a declaration that the chief justice had failed to perform his duties as the head of the judiciary to defend the integrity and credibility of the judiciary when he failed to complete investigations relating to two serious allegations of judicial interference within the Malaysian judiciary in relation to the decision on her father’s sedition appeal and in the case of kindergarten mother, M Indira Gandhi.

Sangeet claimed the issue cropped up when lawyer Mohamed Haniff Khatri Abdulla issued a statement claiming that a senior judge interfered with the outcome of the late DAP stalwart’s sedition appeal and the matter was reported by an online news portal, Free Malaysia Today , on Aug 22, 2018.

She also claimed judicial interference in the case of Indira Gandhi when Court of Appeal judge Hamid Sultan Abu Backer revealed that he had been reprimanded by a top judge for writing a dissenting judgment two years ago in the case of the unilateral conversion of Indira’s children.

Earlier, Malanjum, accompanied by Minister in the Prime Minister’s Department Liew Vui Keong, led a procession of 177 members of the judiciary and legal fratenity to mark the start of this year’s legal year for Sarawak and Sabah.

Sabah has been celebrating it since 18 years ago before Sarawak joined in 2009, a tradition adopted from the Westminister Abbey (in English tradition) for the two states.