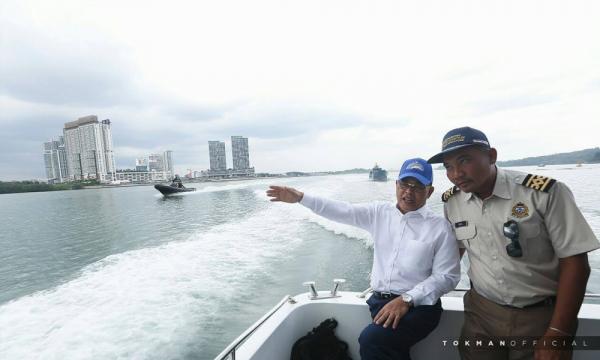 "The (Foreign) Ministry wishes to set the record straight and state that upon learning of the planned visit on Jan 9, ministry officials, under the advice of the foreign minister, immediately and repeatedly contacted the menteri besar’s office and conveyed a message not to proceed with the visit.

"The ministry was concerned that such a visit would be counter-productive after the positive and constructive outcome of the bilateral meetings between the foreign minister (Saifuddin Abdullah) and the Singapore foreign minister (Dr Vivian Balakrishnan) just the day before," the ministry said in a statement today.

It added that when contacted, Osman was already on board a vessel and headed to the Johor Bahru port.

READ MORE: The maritime tug-of-war - navigate through the M'sia-S'pore dispute

The Singapore government accused Osman of intruding into its waters off Tuas during the menteri besar’s visit to the Malaysian government vessel MV Pedoman on Jan 9.

Osman has denied intruding into the republic's territory, saying that his visit was not intended to be provocative, but was merely to observe Malaysian security forces at work.

He had also said that the Malaysian Foreign Ministry was aware of his visit.

Wisma Putra said regardless of the developments, it was committed to the working group and aimed to host the meeting by the end of the month.

The waters off Tuas are currently a subject of territorial dispute between Malaysia and Singapore.

Unlike other parts of the Johor Straits, the boundary between Malaysia and Singapore near Tuas has yet to be clearly defined, with both countries having made overlapping territorial claims.