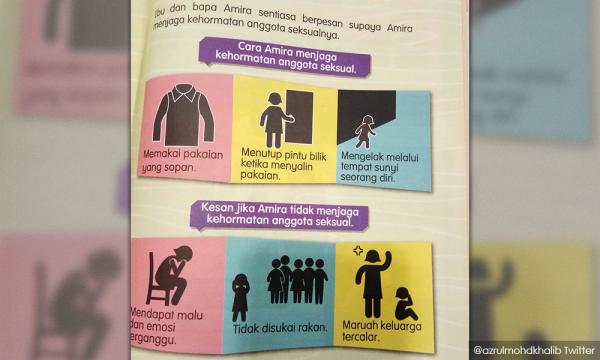 YOURSAY | ‘No wonder so many parents have stopped sending their kids to national schools.’

Jasmine: Obviously, we have too many fundamentalist so-called ‘educationists’ in the Education Ministry, especially the Textbook Division.

Otherwise, how else would one explain this kind of cruel and biased view of a child’s world, where a girl who does not “protect the modesty of her sexual parts” will be shunned by her friends and bring shame to her family?

For certain, the author of the textbook has no clue as to the psychology of children, or an iota of understanding of a child’s innocence.

He – since the author is almost certainly male – looks at the issue with Taliban-like simplicity, with a sexually corrupted heart and mind of an adult.

Guilty, too, are the teachers who obviously didn’t read the book before entering class, ignored it, or are in agreement with its contents.

It took an ordinary and proactive citizen, Azrul Mohd Khalib, to expose this shame. Syabas to him.

Thickskin: Azrul is to be praised for pointing out this matter. Every concerned citizen should scour through all the textbooks, when possible, to root out these undesirable and twisted leanings.

Francis Benali: So, the ministry will issue a corrigendum after the fact. Great, but what else? Is it also now reviewing all other textbooks it produced? And what of the author? Will there be some form of reprimand? Or any consequence?

Deputy Education Minister Teo Nie Ching previously said the textbooks were produced before Pakatan Harapan came into power. So it is understandable if the disgusting conservatism and sexism of the previous regime seeped into the school system.

But it is not acceptable if Harapan doesn’t go all out to weed out this sick strain of patriarchal and extremist thought.

BN tinkered with the school system and educational material to produce more narrow-minded, bigoted, conservative and backward-thinking robots who would grow up to keep the party in power.

If Harapan stands for the opposite of this, then it must eradicate this strain immediately, not wheel out deputy ministers – I wonder why – to plaster on band-aids over the fissures.

If they don’t, then we can assume that it too wants to keep in place the system of mass-producing unthinking dullards.

Worldly Wise: Yes, the Harapan government ought to do what is right. Not what is politically right.

TCM: The Education Ministry must not only review this book, but do a thorough check on all textbooks for dubious messages.

Education is the foundation for the nation’s future. Do not mould our children with the wrong concepts.

Roger 5201: Elements of religious bias in this textbook, which seems to assume if not imply, any rape or sexual harassment is the girl's fault? Who approved such ‘moral’ content and on what basis?

Schools are institutions of learning, so we need to keep politicians and religion out of our schools.

It takes a parent to highlight the wrongs made by a bunch of experienced ‘educators’. What is wrong with the Education Ministry?

Anonymous 2327531438397239: Were such materials properly studied and reviewed by professionals in education and in health?

Sex education should be taught in an objective and comprehensive manner, taking out the gender bias and prejudices usually associated with such subjects.

In addition, don’t let religious dogma influence the teaching of this subject, so that victims are not blamed and shamed or are deemed the cause. It’s time for a new education policy to be implemented.

Vijay47: I find it extremely distasteful and even offensive that when guiding children, “sexual organs” should be referred to.

Nevertheless, I agree that children should be taught about taking care of themselves, especially when we have wheelchair-bound men lurking in playgrounds at 11pm or should a poor girl suddenly find herself transformed into an 11-year-old bride.

The advice itself in the book is acceptable, but the consequences of being abused reflect the warped minds we are encountering with alarming frequency these days – that the woman, the girl, the child is to be blamed for anything untoward that may happen to her.

But we cannot expect anything else from the twisted minds of sick religious teachings.

Anonymous_1419845062: Thank you to the deputy ministers Teo and Hannah Yeoh. But why are the respective ministers, Dr Wan Azizah Wan Ismail and Maszlee Malik, keeping quiet?

Cogito Ergo Sum: Indeed, this should come from the women, family and community development minister, who is also the deputy prime minister, for it to carry any weight.

I am sure Yeoh will soon receive threatening and derogatory statements against her for preaching her ‘liberal but immodest’ faith to others. And soon, this issue will be made fodder in the Cameron Highlands by-elections.

TCM: The page no doubt needs to be changed, but let’s not get carried away. This most likely started out with the noble intention of protecting our girls, but somehow the implementation went wrong somewhere.

Regardless, there should be a review of all existing textbooks by a panel to ensure the correct message is given.

The Education Ministry should not be waiting passively to react. Be proactive and start reviewing all textbooks for gross faults like this.

Anonymous_c97f73f1: This is just the latest example of our appalling education system.

The ministry should start producing good quality tablets. With economy of scale, this is not that expensive and save millions on textbooks.

Wira: It's no wonder that many parents are avoiding sending their children to national schools.