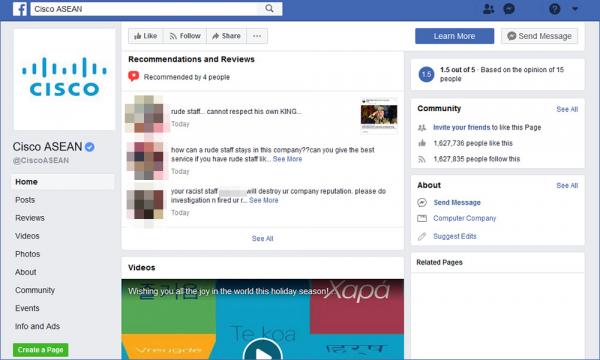 Malaysians have been flooding Cisco System's Asean region Facebook page to demand that the tech giant take action against one of its employees for insulting Sultan Muhammad V.

Most of the fury was aired in the comments section of Cisco Asean's new year message, with up to 2,700 comments at the time of writing.

The majority of comments said that Cisco should sack the employee for being rude or racist in the insult against Sultan Muhammad V.

A large number also suggested that action would have already been taken against Cisco had the staff been operating in Thailand, which has clear lèse-majesté laws.

Others called for a boycott of Cisco products, which are mostly not aimed at ordinary consumers.

A minority, however, added a racial twist to the matter by suggesting certain Malaysian ethnic groups did not join in on the complaints against the said employee.

A handful of Facebook users found the flood of messages on Cisco's Facebook page humorous and described it as "membawang" - the colloquial Malay term for complaining.

Meanwhile, Cisco Asean Facebook page administrators commented last night on the same thread that it had alerted its Malaysian team and that appropriate action would be taken against the errant employee.

The said employee had allegedly made some unsavoury comments aimed at Sultan Muhammad V after he abdicated yesterday, less than two years since he assumed the throne.