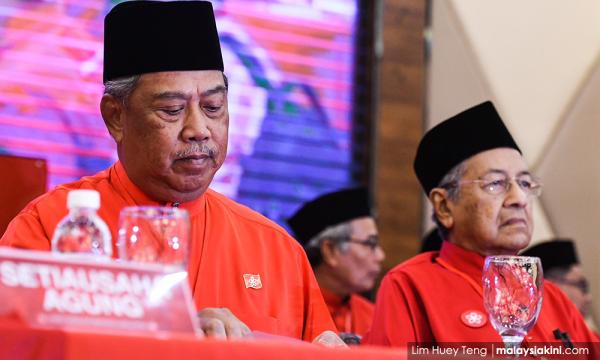 Yoursay: Can a bumi agenda serve all Malaysians?

YOURSAY | ‘Mahathir is a one-trick pony: he only knows governance based on race.’

Muhyiddin: New bumiputera agenda must contribute to growth of all races

Frank: What did Albert Einstein say about doing the same thing and expecting different results?

The outcome of this ‘new bumiputera agenda’ mooted by Bersatu president Muhyiddin Yassin will likely be as tragic as anything spawned by Umno – leaders will become filthy rich beyond anyone’s imagination, and the rest of the bumiputera will be worse off than before.

Hasn’t history taught us better? What we need is a new Malaysian agenda. And everyone who is Malaysian – and their friends overseas – can come together to help the poor no matter what ethnic group they come from.

It would be just like what happened on May 9, when a big section of the Malaysian people came together for a singular goal: to bring down the old kleptocratic regime.

But of course, Bersatu leaders do not want the whole of society to come together and fight poverty. They want the bumiputera poor to continue to be dependent on them, as they were under the Umno-BN regime.

To the young people of Malaysia, your time is now – or else the country will continue to move in the same direction prior to GE14. There is truly no hope anymore in Pakatan Harapan.

Muhyiddin’s statement that “this is not a racial agenda, but a national agenda” is contradictory, and made to appease both sides of the divide.

Mahathir peddled the ‘ketuanan’ agenda for 22 years and failed. Malays are not lazy, but bumiputera dependent policies are forcing them to be.

Special rights undermine the Malay character, heart and soul. And it will be the same 1,000 years from now if such policies are still on the agenda.

The bumiputera community is being led astray by people like Mahathir for their own selfish political agenda.

Anonymous_1529132749: Help all those who need help while not differentiating according to race, creed and religion. Why do Mahathir and Umno past and present insist on race-based politics and policies?

Eradication of race-based politics is one critical step to ensure long-term security, stability, and perhaps even the survival of Malaysia. It is doable, yet the government is perpetuating it with all sorts of deplorable excuses.

To me, it all goes to show Mahathir is a one-trick pony: he only knows governance based on race.

It looks like young Malaysians need to wait longer for these old outdated politicians to fade away, and a younger, more universally exposed generation to take over the reins of governing Malaysia.

Vijay47: We have heard countless similar speeches since time immemorial. They offer us no assurance whatsoever, especially when we recall that every new turn of office seems to demand the same ritual of profound, lofty promises rife with platitudes never to be fulfilled.

We also remember with a sneer how any attempt at change is inevitably met by a barrage of strident protests shrilly baying that fairness, justice, and equality are alien concepts unpalatable to Malay interests.

Yet we wonder. Is there a glimmer of hope, a touch of sincerity, that perhaps this time words spoken will be matched by appropriate action?

First, the baby, now an effete adult, must be weaned off the breast, he must be taught in no uncertain terms that the age for rapacious suckling has long passed, he must fend for and feed himself now.

We acknowledge that Rome was not built in a single day but a hard start must be made.

A simple testimony to the breaking of a new dawn would be if that shameful policy of giving Malays universal discounts in property purchase were restricted to only assets costing say, RM300,000 and less.

Let the poor be sheltered, the rich can heal themselves.

Hearty Malaysian: How can Muhyiddin proclaim the new bumiputera agenda will not hold back other ethnic groups if public university admission is still skewed favourably towards bumiputera?

Not all non-Malays are rich enough to support their children to attend private universities locally, let alone overseas.

Promotion within civil service is also very much based on the New Economic Policy (NEP), hence now it is predominantly occupied by Malays, and likewise in GLCs (government-linked companies).

All these opportunities are denied to other races and it smacks of apartheid. New Malaysia should not be held back by the same NEP, or ‘Never Ending Policies’, whereby even rich Malays can enjoy special discounts on high-end properties.

Voice of a Rakyat: We’ve heard the same before in 60-odd years of BN rule. Now it continues again in the new Harapan government – the only difference is the noises are coming from the minority party in the coalition.

There goes the hope of a meritocratic government. PKR should take over administration now to strengthen its grip before party president Anwar Ibrahim gets played out by his deputy Mohamed Azmin Ali.

Clever Voter: Bersatu’s agenda is clear. They need to compete for the remaining 60 percent Malay votes that went to both Umno and PAS. This has become a national agenda, but it is obvious this is for the party, not the coalition.

Race-based policies are wheeled out to enlarge Bersatu’s membership size. Within the coalition, Bersatu panders to Malays only, unlike PKR or DAP.

Whether they will win votes depends on the bidding war, but the problems of dependency and rent-seeking remain. The entitlement agenda will be reinforced, and once again we will back on familiar ground.

It looks as if the leadership at Bersatu has run short of ideas.

Anonymous_63975706158502: Yes, once again, Bersatu falls into the trap as Umno did. If Bersatu go the New Malaysia way, the whole coalition is guaranteed about 40 percent of popular voters (the non-Malay votes). I am sure progressive bumiputera can contribute another 11 percent for Harapan to win.

But if they go the Umno way with the Malay agenda, Harapan partners will lose. This is because it is uncertain if Bersatu will gain the 40 percent of Malay votes to make up for the shortfall.

Across the Straits: Every word in every gathering is always about bumiputera, ad nauseam. It is never about wealth creation, only distribution.

There has never been any talk about how to move the race forward by industry, down-to-earth programmes, and hard truths. It seems there is nothing worthwhile to celebrate.

TehTarik: The problem is that the NEP is similar to a protective bubble. It's a sort of a cradle-to-grave support system with free healthcare, education (preschool to tertiary), job guarantee (the bloated civil service and GLCs) and generous pensions.

Indeed, the focus is on wealth distribution rather than wealth creation.

Like many socialist societies, such a system will ultimately deplete its finances and begin to degenerate or entropy. Corruption, nepotism and cronyism is also rife in any such system.

Due to rapid population growth, such a system is today simply unable to absorb any more new entrants, with the outsiders struggling to make ends meet.

And because of a mediocre educational system and lack of skills and resources, millions of Malays outside the protective bubble are struggling economically.

Abasir: Here we go again with the obfuscation and the doublespeak. If this is a “national agenda," then why does Muhyiddin call it a new bumiputera agenda?

How and where is it different from the failed policies of the last 60 years, the results of which Mahathir is always whingeing about?

How do we trust you when you can't even come clean on what exactly it is you are selling? And what is stopping you from coming up with a Malaysian agenda?

Is it because you know that Malays have been programmed by you and Umno to recoil from anything that says ‘Malaysian’?