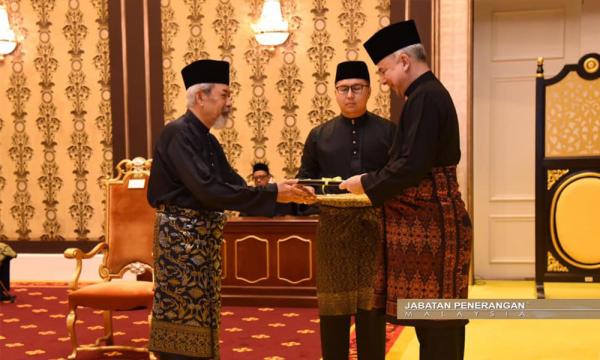 The Deputy Yang di-Pertuan Agong Sultan Nazrin Shah today presented the appointment letter for the Yang Dipertua Negeri of Sabah for the third term to Juhar Mahiruddin, which takes effect on Jan 1, 2019.

The ceremony was held at Singgahsana Kecil in Istana Negara, and was witnessed by Deputy Prime Minister Dr Wan Azizah Wan Ismail.

The Sabah State Assembly recently passed a bill on an amendment to the Sabah State Constitution on the abolishment of the two-term limit for the post of the Sabah Yang Dipertua Negeri (TYT).

Juhar, a law graduate from Wolverhampton Polytechnic, England, was Sabah state assembly speaker between 2002 and 2010 and deputy speaker of the Dewan Rakyat from 1990 to 1999.