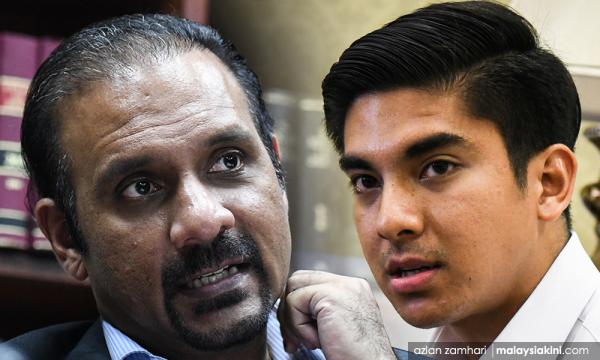 Ramkarpal: Should Saddiq quit over Suzuki Cup loss then?

Ramkarpal said this would be like blaming Youth and Sports Minister Syed Saddiq Syed Abdul Rahman for Malaysia's loss against Vietnam at the AFF Suzuki Cup finals last weekend.

"I personally feel that to suggest that Waythamoorthy ought to be solely blamed for the Seafield issue and, therefore, ought to resign is, as correctly pointed out by some netizens, akin to demanding Syed Saddiq’s resignation for Malaysia’s loss to Vietnam in the recently concluded AFF Championships,

"Surely, this is going a bit too far," he said in a statement today.

Ramkarpal also admonished Syed Saddiq for his "public demand" for Waythamoorthy to resign.

"(Waythamoorthy) would certainly be subject to criticism from the public, but to be publicly told by a fellow minister to resign is quite another thing.

"It goes against such well-established conventions that a government is collectively responsible for its decisions.

"If at all Waythamoorthy is to be reprimanded, such reprimand ought to come from the prime minister and not his fellow ministers," the Bukit Gelugor MP said.

Syed Saddiq has not made any public remarks calling for Waythamoorthy to quit.

He had, however, defended his Bersatu Youth excos' right to submit a memorandum urging Prime Minister Dr Mahathir Mohamad to sack the Hindraf leader.

Bersatu Youth information chief Ulya Aqamah Husannudin said Syed Saddiq's only role was to arrange the meeting between them and Mahathir.

Calls for Waythamoorthy to quit have been made from various groups, including Pakatan Harapan leaders, following the death of firefighter Muhammad Adib Mohd Kassim.

The 24-year-old firefighter was part of the Fire and Rescue Department team deployed in response to vehicles being torched by rioters outside the temple on Nov 27.

According to the police, he was dragged out of the vehicle and assaulted.

Adib had succumbed to his injuries at the National Heart Institute in Kuala Lumpur on Monday night.