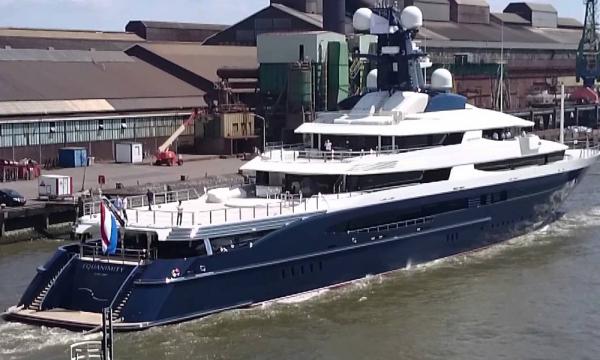 Low Taek Jho has accused Putrajaya of spoiling the value of the superyacht Equanimity, which he has been accused of acquiring using misappropriated 1MDB funds.

The fugitive financier pointed out that the government failed to sell the superyacht in the first round of auction, deeming it a "failed" public relations stunt.

"The predictable failure of the Dr Mahathir Mohamad government to hold a successful auction of the yacht Equanimity is another example of a Mahathir regime prioritising illegal acts over the rule of law in a transparent effort to score political points.

"This was a failed public relations stunt from the outset," Low said in a statement released through his lawyers today.

"By illegally seizing the yacht from Indonesia, where the US government had been willing to cover the substantial cost of the vessel's upkeep, docking it in a hazardous environment at Port Klang, and then subjecting the vessel to poorly-controlled media and public access, the Malaysian government was responsible for substantially eroding the Equanimity’s value," he added.

Indonesia, in cooperation with the US Federal Bureau of Investigation, had seized the superyacht off the waters of Bali in February.

In August, the Indonesian government surrendered the vessel to Malaysia. The US, which was also seeking the seizure of the vessel, dropped its action after Malaysia took control of the superyacht.

Low accused Putrajaya of securing the vessel from Indonesia through "extra-judicial" means.

"The Mahathir regime arrogantly ignored court rulings in Indonesia as well as established legal proceedings in the US.

"Consistent with its politically motivated actions, and through a predetermined process by the Mahathir regime, the Malaysian government only then announced that it had established a so-called “right to sell” the vessel," he said.

Low claimed that no sensible buyer would purchase the vessel at anything other than a markedly lowered price.

"With so much doubt hanging over its ownership, no sensible, independent third-party buyer is going to purchase a vessel from an unreliable vendor like the Mahathir regime at anything other than a hugely depressed value.

"Indeed, what now amounts to the doomed fire-sale of the Equanimity is an admission that this political public relations stunt by the Mahathir regime has failed...

"...These acts by the Malaysian government have been nothing more than political gamesmanship at the cost of the rule of law and the fair administration of justice," he said.

The statement was released to the media by Wells Haslem Mayhew Strategic Public Affairs, an Australian-based lobbyist group.

On Thursday, it was revealed that the Admiralty High Court in Kuala Lumpur did not accept the bids for the Equanimity as they were not acceptable.

As such, the vessel will now be sold through negotiations with a guide price of US$130 million (RM543 million).