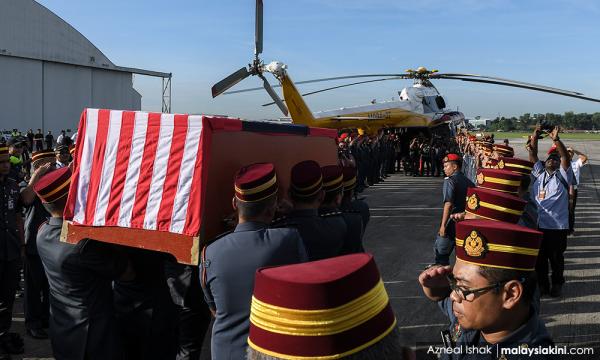 Remains of Muhammad Adib flown to Kedah by helicopter

The remains of Muhammad Adib Mohd Kassim were brought out of the compound of the National Institute of Forensic Medicine (NIFM) at the Kuala Lumpur Hospital at 7.18am upon completion of the funeral rites and prayer.

Adib died at the National Heart Institute (IJN) and the body was sent to NIFM for post-mortem.

According to Bernama, his remains were brought out of NIFM in a Fire and Rescue Department’s (FRD) hearse and taken to the Airod facility in Subang, escorted by FRD and the police.

The remains of Adib will be flown by helicopter from the Airod facility to Kedah and will be buried in Kampung Tebengau, Kuala Kedah, as requested by his family.

On arrival in Kedah, the last alarm ceremony would be conducted by FRD.

The burial is expected to be conducted after the zohor prayer today.

The 24-year-old firefighter died at 9.41pm at the IJN yesterday after he was allegedly beaten up by several people during the riots near the Sri Maha Mariamman Temple in USJ25, Subang Jaya, on Nov 27. He was there in an operation to put out a fire in front of the premises.

Anwar: Adib was a hero

In a Twitter posting this morning, PKR president and MP for Port Dickson Anwar Ibrahim described Adib as a hero who paid the ultimate price while serving in the line of duty.

Anwar said the perpetrators of the murder would be brought to justice.

"In the meantime, we must stand united and ensure that nobody attempts to hijack this tragedy & sow hatred within our community," he said.

Minister in the Prime Minister’s Department Senator P Waythamoorthy said he too shares the grief experienced by the family of Adib.

Waythamoorthy described the 24-year-old as a brave and credible fireman who served the nation with full dedication.

The police, he said, were working hard to make sure the culprits of this heinous crime would be brought to justice swiftly.

“I wish to offer my deepest condolences to Muhammad Adib’s family… I share their grief and the whole nation mourns with this family in this tough time,” Waythamoorthy said in a statement issued early today.

Meanwhile, in a separate statement later, the Save Seafield Mariamman Temple Task Force chairperson S Ramaji also urged the authorities to bring all those responsible for Adib's death, to book.

"They must be punished as their act of violence or scheming has not only taken the life of a public servant but has also compromised the nature of our struggle to retain the Seafield temple in its current location," he said.

"Violence is not and will never be a solution to any problem. And those who indulge in it for whatever reason have to investigated and punished accordingly."

Adib to be awarded posthumous promotion