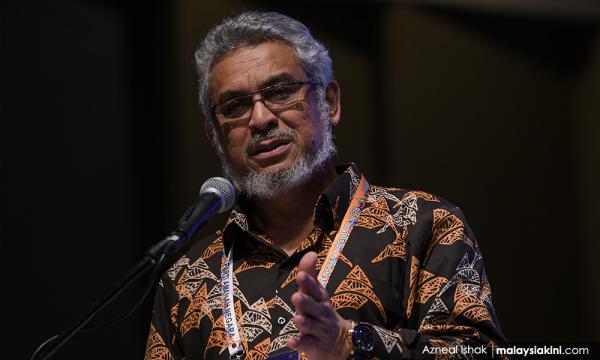 Even the Prophet put off keeping a promise once, says Khalid

AMANAH AGM | Even Prophet Muhammad was once forced to delay fulfilling a promise, Federal Territories Minister Khalid Abdul Samad said today in explaining why Pakatan Harapan could not fulfil some of the pledges in its election manifesto.

According to Khalid, the Harapan administration is not deliberately going back on its promises, but has been forced to do so due to financial constraints.

"Some people say that we did not keep up to our pledges.

"Even Prophet Muhammad had once taken a friend from Medina to Mecca, promising to carry out the umrah, but was stopped from doing so.

"That is the prophet himself. How about manifesto pledges made by mere mortals?" he asked during his winding-up speech at the Amanah convention in Ipoh.

Khalid reiterated that Harapan remains committed to fulfilling the promises it made prior to the 14th general election.

"We really want to do it but we can't, because there isn't enough money.

"And this is not because (Amanah president) Mohamad Sabu wants to buy Birkin handbags for his wife," he quipped.

In his speech, Khalid also claimed that even ministers have had to sacrifice their pay and allowances in light of the austerity measures practised by the government.

"The ministers have taken a 10 percent pay cut, our allowances in Parliament have been cut. A lot more has been cut.

"Why? To save money. There is no money. BN says the country's debts are only RM600 billion, but Harapan says it's RM1 trillion. You want to believe BN, go on."

"Don't assume that ministers are enjoying life with their high salaries and allowances.

"I want to tell you, ladies and gentlemen, that monthly, there is barely RM1,000 left from my income (after deductions and commitments).

"Why? Because the party needs money, the people need money. Everything needs money."

In a statement later, Khalid noted that his statement had courted criticism.

"I had never intended to blame Harapan's weaknesses on the prophet or accuse the prophet of breaking promises.

"If there are those who take my meaning as such, I apologise to Allah and his prophets," he said.

Khalid said what he meant was that people could do their best, but not all that they do can be fully achieved.

"In the case of Harapan's manifesto, we have and will continue to work towards fulfilling what has been promised.

"However, due to financial constraints, we have to postpone the implementation of some of the pledges until the country's finances have recovered," he said.

Harapan gov't does not need Icerd unlike others, says Dzulkefly