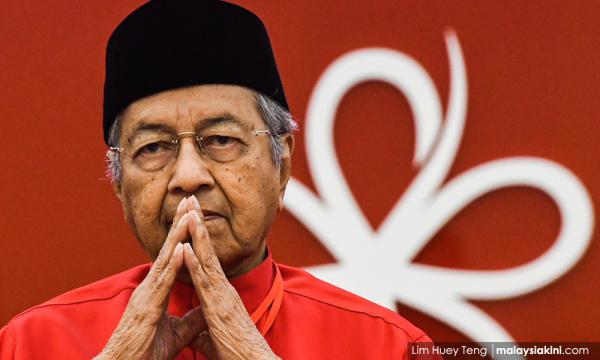 Yoursay: Mahathir is reverting to his old Umno ways

YOURSAY | ‘Bersatu is Umno 3.0 and Mahathir is not much different than when he was PM previously.’

Caripasal: DAP leader Lim Kit Siang and PKR leader Anwar Ibrahim must publicly say that they only recognise the original 13 MPs from Bersatu, i.e. the MPs who started the movement to kick BN out on May 9.

The politicians from Umno should have no standing in Pakatan Harapan. There should be no extra bargaining power for Bersatu even with their inclusion.

If Anwar becomes prime minister, Bersatu will be allocated ministerial posts based on its original number, i.e. 13. The Umno MPs will only matter in Parliament - to support Dr Mahathir Mohamad.

4Malaysia: Mahathir’s Bersatu party is the disease in Harapan. It is the only racist party and even wants to undermine Harapan’s component party, Warisan, by recruiting Sabah Umno frogs.

Bersatu is Umno 3.0 and Mahathir is not much different than when he was PM previously. He is leading Harapan and the country into a downward spiral.

AnotherKomentar: Mahathir and Bersatu need ex-Umno leaders to prop them up vis-à-vis the delicate dynamics in Harapan and so that they are not seen as inferior to DAP and PKR.

Plus, only with the help of these losers can Mahathir unlock the obscene wealth of Umno. Malaysian politics will take more than May 9 to change.

Drngsc: Bukit Gelugor MP Ramkarpal Singh, please convey this to Lim Kit Siang and Lim Guan Eng so that this issue can be trashed out in the Harapan presidential council, before Bersatu takes in 40 ex-Umno politicians to override PKR's 47 MPs.

This is a serious matter. Otherwise, kick Bersatu out now should it persist to take in these frogs, or ask DAP to leave Harapan and be Harapan-friendly instead. Mahathir is now reverting to his Umno ways.

Anonymous 2436471476414726: Yes, PKR, DAP and Amanah must insist on an emergency presidential council meeting to discuss this matter. This is against the spirit and philosophy of the coalition.

Kangkung: Imagine, we fought for more than 20 years to realise the dream of creating a rakyat's government and now the very people who once mercilessly suppressed the rakyat are now given the express ticket on board of the Harapan train. This is totally unacceptable.

Anonymous: This is a calculating and cynical move by these frogs who presume that now that Umno is in no position to carry on with the handouts, they can live off the largesse of Harapan instead.

In all these cases, they should be forced to step down and seek re-election. Just like their discredited leaders, they have no shame.

Malaysianmalaysian: Indeed, the rakyat voted Umno out. We do not want them back in any form. Malaysia needs to move forward. It can only do so by changing the people in power.

The rally on Dec 8 is enough proof that Umno and ex-Umno leaders will not allow Malaysia to grow.

The Wakandan: Perhaps because PKR has not been gentlemanly enough with Bersatu that the latter is forced to take in new MPs to inflate its number in the Parliament.

PKR has been complaining that the number of Bersatu ministers is not proportional to its MPs and that PKR should be allocated more ministers than what it has now.

Anwar seems to be courting Umno leaders as well, giving the impression that he wants to gain their support, which of course, would jeopardise the equilibrium of the present component parties in Harapan.

Simple Truth: Mahathir has to consider very carefully what he is doing in order to ensure that he does not betray the Malaysian voters who voted for him and the Harapan government.

To be a rubbish collector and let in these men and women of ill reputation only confirms that Dr M is willing to collect rubbish to satisfy his ambitions.

Oscar Kilo: We went through a major surgery to remove the cancerous Umno-BN tumour. Now Harapan is transplanting the Umno-BN cancer back into our body. That’s plain stupid.

Odysseus: These Sabah frogs are busy getting themselves get-out-of-jail-free tickets. These dirty politicians will slowly but surely creep into one of the Harapan parties, particularly Bersatu, and continue with their dirty politics again.

I hope the Harapan government doesn't take this as a way to enable them to gain impunity from their past wrongdoing. Otherwise, Harapan is no different from BN.

Anonymous_1538808416: This is expected and more will come. Bersatu is looking to grow its wings to be on par or bigger than PKR. And Bersatu has fixed deposit in PKR – ‘Thanos’ just needs to snap his fingers and half of PKR lawmakers will defect.

When Thanos said he would not take in corrupted frogs, deep in his heart, he knew he was responsible for Umno's current state.

He gave birth to cronyism during his earlier reign, a practice which was abused by his successors who turned into kleptocrats and put into place corruption on such a grand scale that all levels were corrupted.

Now, he wants to leave behind a good legacy. He wants to be remembered as the saviour of the nation. This is also to pave the way for his son to take over because his son had no chance in Umno.

Harry Mou: Again, we want to ask PKR, DAP and Amanah, what are you going to do about it? Just let Bersatu hijack Harapan and turn it to BN 2.0?

NA: Disappointing. We ask for a credible opposition. What we get is political opportunism. Politics in Malaysia is so immature. Democracy is a concept that nobody understands.