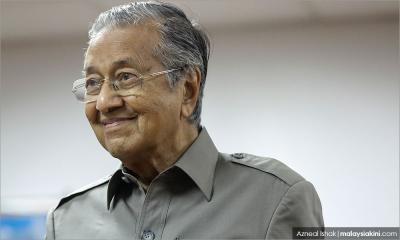 “Yes, they met me. They came to tell me they want to leave Umno,” he told the media when asked after launching Proton-Geely’s first sports utility vehicle (SUV) X70 in Kuala Lumpur tonight.

Mahathir added that the lawmakers will be welcome into Pakatan Harapan should they support the ruling coalition and have a clean record.

“We have to see how they behave.

“If they are supportive and they haven’t done anything wrong in the past, we will accept them,” said the Bersatu chairperson.

He however reiterated they will have to maintain as independent lawmakers for the time being.

“They have to stay as independents and support the government,” he stressed.


When asked to respond to claims that he and Sembrong MP Hishammuddin Hussein collaborated to engineer the defections, Mahathir sidestepped the question.

Bersatu sources told Malaysiakini that the party has plans to expand to Sabah.