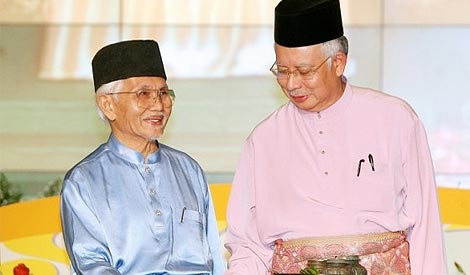 Yoursay: No need to help Malays since Najib, Taib are rich

YOURSAY | 'By Mohamad Hasan’s logic… the Malays do not need aid anymore.'

PTL: Why are the non-Malays begrudged for having been generally more successful' whether in business or profession? Were their successes derived from deceit and deception?

In spite of being deprived and disadvantaged as compared to the privileged ones, they strived and laboured to improve their station in life. It is through their efforts and sheer grit that some of them succeeded.

But there are still many of them who have not succeeded and need help. These unsuccessful ones are conveniently overlooked and ignored.

Headhunter: Come to think of it, the bumiputera policy actually helped the non-bumiputera a lot.

It spurs them to work harder to overcome the discriminatory policies stacked against them by becoming self-reliant, working harder, saving the money they earn so that their children can get an education that public educational institutions denied them.

And they teach their children to stand on their own feet instead of waiting for handouts from the taxpayers and generous "allowances" from their parents.

Umno deputy president Mohamad Hasan, you and your dependency breathers could learn something from the Chinese instead of whining that you are still not getting enough from the hard labour of others.

You want to have a decent life, work for it.

On the Other Hand: By Mohamad Hasan’s logic, with former prime minister Najib Abdul Razak and former Sarawak chief minister Abdul Taib Mahmud being among the richest men in Malaysia, the Malays do not need aid anymore.

Bravemalaysian: Indeed, warped logic by Mohamad Hasan. Just because those being discriminated are more successful, it does not mean that there is no discrimination.

They became successful in spite of the discrimination. That's why Umno has no future because it continues to choose men like Mohamad Hasan to be the deputy president as if there is no better person in Umno.

Existential Turd: Yes, some non-Malays are rich, most just earn enough to get by. Many become professionals because that is where capabilities still count. Their achievements came despite the discriminatory policies put on their shoulders. This by no means justifies the policies.

A person who subsists on handouts should be more humble. Are Malays so daft, they can't even tell shame from honour?

So Mohamad Hasan, before you say you would rather be a second-class citizen if you are rich, are you prepared to put in the hard work, and no quotas, no subsidies?

CKL: It is indeed frightening that a senior Umno politician, its No 2, talking like this.

First, are the Chinese controlling Kuala Lumpur and Seremban? What does he mean by control? By its ordinary meaning, control means having the power to decide how things are run.

Can the Chinese decide what they like to do in KL or Seremban? The KL mayor is Malay, and the MB of Negeri Sembilan is Malay. So by what logic or argument can this man make such a nonsensical claim?

Second, if he says that the Chinese own much of the assets or buildings or businesses in these two cities, does he know how this came about? Did the Chinese rob someone? Did the government give them away for free?

No, if the Chinese or anyone own anything - assuming he didn't steal - then he has worked hard, saved and invested. Is this not the right way? Or is it illegal?

Third, if there are many non-Malays who have professional degrees, especially foreign ones, did the government or some universities simply give them away for nothing?

These degrees were earned through careful savings and tremendous sacrifices by their parents. And much hard study by those students.

In fact, the government is helping the Malays much more than the non-Malays. If they still don't succeed, they cannot be envious of others.

Fourth, if the non-Malays have received the same treatment and no discrimination from their own government, they would have achieved much more.

One cannot argue that one should be satisfied with one's condition just because one is better than the other who chooses to achieve less. This perverse logic is based on the concept that if I am poor, you shouldn't be much better off.

Why can't we all be much better off, competing against one another so we all come out ahead?

David Dass: I think that one cannot point to a list of Chinese and Indian billionaires and say that the Chinese and Indians have nothing to complain about. Detailed studies have been done. Let the statistics speak for themselves.

Wealthy businessmen are the unintended consequence of the capitalist system. They are successful.

They provide products and services the nation needs. They make money. They pay taxes. The government determines the rate of taxes.

There is no restriction on Malays going into business. But business carries high risk. Malay politicians cannot simply look resentfully at Chinese business successes and say Malays are entitled to more of that.

The development of commercial acumen requires a better education system. The inequitable distribution of wealth intra-communities is a problem.

Anonymous_7b825f63: We are not against the government helping the Malays. We are against BN policy of creating rent-seekers.

These rent-seekers, some of whom are non-Malays, distort the economy and are non-productive. They only increase the cost of doing business, charging rent without providing real services.

Hence, selling approved permits (APs), licences and the Ali Baba-type contracts are big business in Malaysia. It is the corrupt people that we are against.

Yoursay: Hypocritical for Umno to claim to defend Malay rights