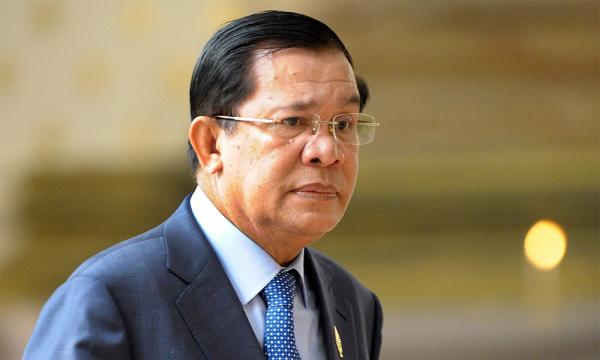 Cambodia's Parliament is reviewing a five-year ban on more than 100 members of the main opposition party, which could allow them to return to politics, following threats by the European Union to deny duty-free trading access to the Southeast Asian nation.

The EU last month began a formal procedure to strip Cambodia of its "Everything but Arms (EBA)" initiative, after Prime Minister Hun Sen (photo, above) returned to power in a July general election in which his party won all the seats in Parliament.

"To further promote democracy and the rule of law, theNational Assembly is reviewing legal provisions to enable individuals who were banned from politics to resume political activities," Cambodia's Foreign Ministry said yesterday.

It was referring to a Supreme Court ban on political activity by 118 members of the main opposition Cambodia National Rescue Party (CNRP), which the court dissolved last year at the request of the government after accusations that the party was plotting to take power with the help of the United States.

CNRP leader Kem Sokha was released from prison in September after spending more than a year in jail on treason charges but remains under house arrest in the capital, Phnom Penh.

'Piecemeal solutions do not restore democracy'

The party's deputy president, Mu Sochua, demanded that Sokha (photo) be freed, with all charges dropped and the party reinstated.

"Piecemeal solutions do not and cannot restore democracy. The judiciary must be independent and not a political tool," Sochua told Reuters.

The crackdown on opposition also coincided with increasing pressure from Hun Sen and his allies on Cambodia's independent media ahead of the July vote.

The English-language Cambodia Daily shut down last year after the government ordered it to pay millions of dollars in back taxes or face closure. About 30 radio stations were also shut last year.

The government "always cherishes promotion of freedom of press and freedom of expression", the Foreign Ministry added in yesterday's statement, saying the RFA and VOA were free to reopen their offices in Cambodia.

Cambodia should "allow both RFA and VOA programmes to once again be broadcast freely on Cambodian radio stations, consistent with the government's stated commitment to a free press," US Embassy spokesperson Emily Zeeberg said in a statement today.

RFA spokesman Rohit Mahajan said that before RFA can consider resuming operations in Cambodia, a number of issues would have to be resolved, including the dropping of charges against two former RFA journalists.