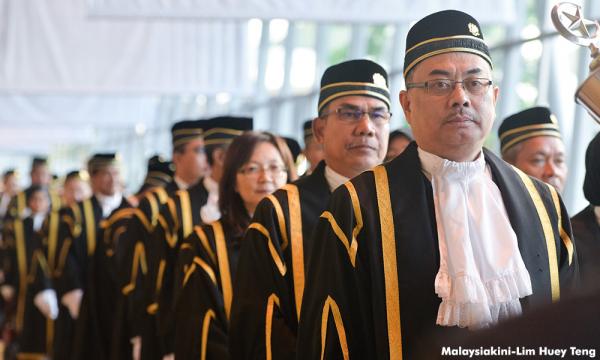 Yoursay: We need judges who are competent, not just senior

YOURSAY | ‘Why promote dead wood simply based on seniority?’

Elevation of judges: Seniority must be the overriding factor

Clever Voter: Judicial independence was debatable with a spate of dodgy judgements during former prime minister Najib Abdul Razak's regime, and one cannot guarantee this will be any different with the changing of the guard.

Until institutional reforms take place, there are no guarantees. After all, the affiliations between senior ministers and judges run deep.

Seniority should not be the foremost criterion – it is the worst, in fact – in any promotion exercise.

The 'wait for your turn' maxim is useful in a patronage society, but if we want a more meritocratic system, then it should be based on performance.

Sound judgement from peer review, public and expert analysis, and above all objectivity, are all straightforward criteria. Indeed, we should bring back the jury system to end the one-man decision.

Judges are, after all, humans, prone to temptations and subjectivity.

Unspin: For the past 60 years, Malaysia has probably been one of the few countries in the world where the wisdom of our judges is inversely proportional to their seniority.

We have lost count of how many wise judgements are made at the lower courts only for them to be overturned at the Court of Appeal or Federal Court. It is about time we promote judges based on meritocracy vis-a-vis seniority or political inclinations.

Panorama123: Mere seniority does not warrant promotion. Promotions should be based solely on performance and other relevant appraisal guidelines. Talent must be duly rewarded, and this will propel an excellent judiciary.

Anonymous_ba958b7b: I am very uncomfortable with many points raised in this article.

First, seniority does not guarantee competency. Second, just because a judge is committed to his career on the bench, does not justify his or her promotion based on seniority.

Third, and I quote from the article: "It must naturally be assumed that each and every judge already possesses all the attributes required of a judge, as well as the highest possible standards of integrity," which is quite the presumption.

The behaviour of previous judges does not warrant this. Judges should be measured for their past behaviour and performance, before they are promoted to the next senior position..

Patriot Abroad: Is Malaysian Bar vice-president Abdul Fareed Abdul Gafoor serious? Competence and performance surely trump age. I am 60 years old, and in my recent career have ended up working for younger managers, who are smarter, more creative, with lots more energy – and I am happy with that.

Not everybody is like Prime Minister Dr Mahathir Mohamad. We naturally slow down as we grow older, memory is not as good, energy levels decline and ambition too. Let the young take over.

Rupert16: This is nonsense by Abdul Fareed. The overriding factor for the promotion of the judges should be based on two factors – integrity and competency in dispensing justice. Certainly not based on seniority.

Proles: Dear vice-president, what a backward approach. I agree with comments here, why promote dead wood or diseased wood simply based on seniority?

In fact, there should be a review of their performance and an exit strategy to get rid of the incompetent. The taxpayers deserve better.

Your strategy seems to be to ensure they all have a job for life and keep promoting them regardless of their abilities and performance. Sounds like a case of sour grapes here.

Hbasill: Seniority is the yardstick often used – besides race – in the civil service when it comes to promotions. I would advise the writer, if he is good at his practice, to think intelligently before commenting, especially when he is the vice-president of the Malaysian Bar.

More importantly, I would instead propose looking at the quality of written judgements as well as punctuality or time taken to write the judgements.

Seniority should come after all the above, and when there are more than the desired number eligible for promotion.

YOM: For the Bar to argue that seniority should be the foremost criteria for promotion of judges is totally ridiculous.

Surely the highest judicial body in the land must be staffed by the best. Merit is the prime consideration. Only when all things are equal should you use seniority as the determining factor.

No wonder we have mediocrity – not just in the judicial service, but also universities, civil service and all other branches of government. And not forgetting MPs, ministers and deputy ministers.

CKL: To assume that all current judges possess the right qualifications and have the utmost integrity is totally wrong.

The kind of judgements we have seen over the past two decades, most recently under the Najib regime, tells us that not all is well with the judiciary. It needs reform, and some judges may need to be put out to pasture sooner.

Fairplayer: Seniority is one factor, but qualities like integrity, credibility, impartiality, fairness, competence, non-racist, level-headedness, sense of unprejudiced justice, upholding rule of law, having a compassionate and God-fearing human heart without fear or favour, etc., must be weighed first.

Ipohcrite: Seniority is obviously important, but should not be the overriding factor. Many judges do not perform, as we all know, and some judgements take forever to be written or not at all.

These days, the names of the senior judges in the higher courts are not easily recognisable, for the simple fact that they do not pass or write any good judgements, let alone any worthy landmark judgements. Mediocrity best describes them.

The seniority of those judges, who have been left behind in the promotion stakes, should be used to flag any negative bias against them or poor performance on their part.

Justice: In these days of extensive and intrusive power bestowed upon the executive – either because of the all too powerful control by the executive over our legislature, or a very pro-executive judiciary that perceives actions, suits against the ministers, ruling parties politicians and the big corporations being 'anti-government' and 'anti-development' – we urgently need judges of high integrity and who have courage to be very independent minded.

We can enact, pass or provide all the best procedures, guidelines and criteria on the appointment, promotion and ethics of and for our judges, but if they do not have the right mindset, principle, values and courage, all those will be just useless.

Anonymous 2251681440225523: There was once a senior judge, who is still alive and kicking, who said in court that a Malay Muslim will not lie, which shows how racist he is. Forget justice if this is the standard of the judges.

Mo Saladin: It is telling that we need to assume why the supersession of senior-most judges is taking place.

Are we also to assume that the executive or our prime minister has the veto power over the appointments? Frankly, without the right-to-information ambit, all we can to do is just assume from this opaqueness.

Mechi: If we adhere to meritocracy and integrity principles, it is easy to promote the outstanding ones. The black sheep must be coached and counselled or told to shape up or be shipped out. No two ways about it.

Follow international and accepted criteria. The previous government made a mess out of promotions in the judiciary, police and GLC heads too. Be mindful, Pakatan Harapan.

So true how the judiciary was made to be predominantly of one race, but there are equally very honourable judges among them as there are rotten corrupted ones among the other races.

If only we can get back the glory of the judiciary of the yesteryear. The likes of former chief justice Mohamed Suffian Mohamed Hashim, former Federal Court judge Eusoffe Abdoolcader as well as former Federal Court lord presidents Salleh Abbas and Sultan Azlan Shah seem to be a breed difficult to regain.

MahuSeeLui: Allegations of judicial misconduct had been swept under the carpet in several cases, and some were serious enough to be criminal in nature, if proven. Under the BN government, nothing was done. Public confidence was and probably is still at a low ebb.

We need a royal commission of enquiry to look at those allegations, and exorcise the devils in the system. That's necessary to reform the judiciary and restore its once-lofty reputation.