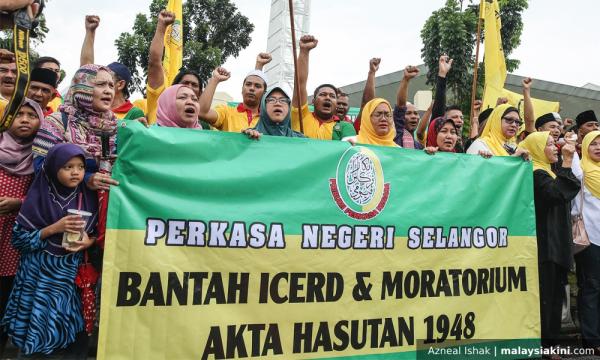 However, perhaps unsurprisingly, the possible ratification of one convention in particular – the International Convention on the Elimination of All Forms of Racial Discrimination (Icerd), which commits state parties to eliminate all forms of racial discrimination and to promote understanding among all races – has triggered the ire of Malay rights activists in the country.

Political opponents in Umno, PAS and newly formed Malay rights NGO Gagasan 3 were quick to take a swipe at the Pakatan Harapan government for “selling out the Malays and Islam,” accusing them of destroying the “social contract” agreed upon before independence.

They zoomed in on the Malays’ “special position” as enshrined in Article 153 of the Federal Constitution that allowed for affirmative action and quotas for, among others, positions in the public service, permits for businesses and scholarships that they have long championed and exploited.

They called for mass protest rallies and even threatened violence if the government were to go ahead with ratifying Icerd, which they claim would end the Malays’ “special position.”

The first Agong’s speech in Parliament

In truth, however, statements bemoaning the imminent implosion of Malaysia upon Icerd’s ratification are exaggerated and lacking substance. One need look no further than the first Yang di-Pertuan Agong’s speech at the very first parliamentary session on Sept 12, 1959, to know what the Constitution means to the nation and its people:

"The Constitution of the Federation of Malaya is in itself a democratic achievement of the highest order.

"It is the product of many minds working with a common aim, to evolve a basic charter for this new Malayan nation of ours - a charter drawn from our past experience and suited to the conditions of our surroundings and way of life - a charter of our firm faith in the concepts and traditions of parliamentary democracy - and finally, and most important of all, a charter of our common belief that certain fundamental liberties are essential to the dignity and self-respect of man.

"These fundamental liberties are written into our Constitution. They include the liberty and equality of persons under the law, the basic freedom of speech and freedom of worship.

"In more symbolic term it is the compass which will guide us through the unknown future … In particular, this Constitution is the guardian of the rule of law … The Constitution belongs to all of us - it belongs to Us as the Yang di-Pertuan Agong, it belongs to you as the Members of Parliament, it belongs to the people as the fount of power."

Parallels can be drawn between the “Malaya Baharu” of the past and “Malaysia Baru” of today after the historic 14th general election.

In 1957, Malaya fought and won by peaceful means political independence. The Constitution became a charter guaranteeing the best democracy had to offer to the fledgling nation, including the principles of fundamental liberties and equality of persons under the law for all citizens who had made Malaya their home and object of their loyalty.

Fast forward 61 years later, present Malaysia has undoubtedly progressed in many ways since that first speech – for better and worse.

Under BN’s rule for so many decades, our society has grown divided and despondent, having been plagued by religious and racial politics that emphasised the differences and separateness of Malays and non-Malays; Muslims and non-Muslims.

Nonetheless, despite all odds, Malaysia persevered, and we have once again peacefully broken free – this time from the one-party BN rule to become a “new” nation.

In Malaysia’s rebirth, it is key that we become a nation as originally envisioned in the Constitution.

The naysayers who have predicted the imminent collapse of our society if Icerd is ratified have deliberately misinterpreted the spirit and intent of Article 153 of the Federal Constitution.

There is no mention whatsoever of “bumiputera rights” or “Malay rights” in the constitution; instead, it serves to “safeguard the special position of the Malays and natives of any of the States of Sabah and Sarawak and the legitimate interests of other communities.”

Article 153 has sought to level the playing field between the Malays and the indigenous peoples of Sabah and Sarawak with that of the other ethnic groups in light of their economic standings after independence, so that they are not left behind as the nation progresses and develops.

Here then is the unvarnished truth that they refuse to accept: there is no threat to Article 153 from the ratification of Icerd, and the two are completely compatible. Icerd provides for genuine affirmative action policies on a temporary basis designed to narrow the economic gaps within society – which is precisely what Article 153 sets out to do.

Article 153, therefore, falls squarely within the scope of Article 1(4) of Icerd, in that it provides that “special measures” such as affirmative action policies are permissible.

"Special measures taken for the sole purpose of securing adequate advancement of certain racial or ethnic groups or individuals requiring such protection as may be necessary in order to ensure such groups or individuals equal enjoyment or exercise of human rights and fundamental freedoms shall not be deemed racial discrimination, provided, however, that such measures do not, as a consequence, lead to the maintenance of separate rights for different racial groups and that they shall not be continued after the objectives for which they were taken have been achieved."

While Article 153 may still be relevant today, in recent decades, the affirmative action policies have been thoroughly misused by the previous BN government.

Rather than uplift the Malays, they became a means for Umno to cement political support, creating a rentier system that mostly benefited those already well-off, while marginalising other ethnicities in the process and contributing to disunity.

The Icerd discourse has been distorted by preying upon the cracks and insecurities of racial and religious relations in Malaysia, all of which ultimately led to the government backing down from ratifying the treaty.

It is obvious that ratifying Icerd is fundamental in restoring Malaysia to the original spirit and intent of our Constitution. Its ratification does not in itself automatically eliminate racial discrimination nor eliminate Article 153 as argued by its opposers.

Malaysia still needs to adopt and amend relevant legislation, policies and institutional measures to ensure that the objectives of the treaty are met. Additionally, human rights treaties are largely flexible in nature, and it is possible to ratify Icerd without applying certain provisions in the treaty which Malaysia is not ready to comply with.

Icerd, like all human rights treaties, is not a magic wand but its ratification would provide a solid base for greater respect and protection against racial discrimination.

Despite the about-face in stepping forward, Mahathir has done more than just declared Malaysia’s commitment under international human rights law – he has signalled that we are ready to confront this controversial topic of race relations and discrimination together, as a democracy, and that bodes well for Malaysia Baru.