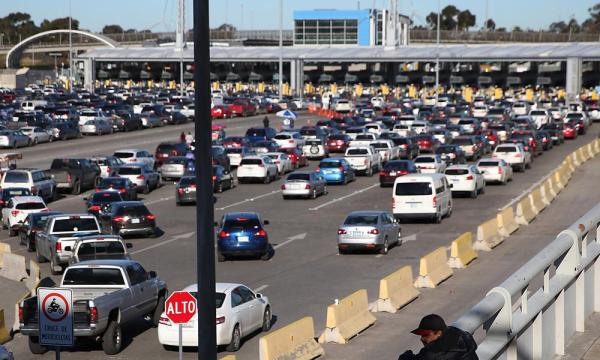 The United States closed its busiest border crossing with Mexico yesterday after Mexican police broke up a protest of Central American migrants massed in Tijuana, scattering some demonstrators toward the border where US officers hurled tear gas from the American side.

Traffic in both directions was suspended at the San Ysidro port of entry between San Diego and Tijuana, the busiest land border in the Western Hemisphere, the US Customs and Border Protection agency said on Twitter.

Mexican police, some wielding shields, scattered migrants and protesters, many of whom rushed toward the US border. US Customs and Border Protection officers repelled them with a volley of canisters emitting large clouds of gas as US and Mexican government helicopters clattered overhead.

The Mexican government said later yesterday it had retaken control of the border crossing after nearly 500 migrants tried to cross the US border "in a violent manner", and vowed to immediately deport Central Americans who attempt to enter the United States illegally.

US President Donald Trump has raised alarm for weeks about a caravan of Central American migrants as it approached the United States, with its members planning to apply for asylum on reaching the United States.

Tensions on the border had been rising in recent days, with thousands of migrants camped out in a sports stadium in Tijuana and hundreds periodically gathering near the main border crossing. The migrants, who are fleeing poverty and violence, have said they would wait there until they could request asylum, despite growing US measures to tighten the border.

Yesterday, hundreds of caravan members, including women and children, were peacefully protesting with chants of "We aren't criminals! We are hard workers". As they reached a bridge and stairway that leads to a square near the US border, they were stopped by Mexican authorities, who told them to wait for permission.

As the morning wore on, and it became clear they would not get permission, people started to express frustration.

'My litter girl is sick'

A small group, some of them bearing the Honduran flag, broke off and headed a few hundred metres away toward a canal between Tijuana and San Diego that leads to the border fence.

At that point, before the group had reached the border, US Customs and Border Protest officers who had gathered on the other side of the fence launched canisters of what a Reuters photographer identified as tear gas.

Protesters were caught between the Mexican and US authorities. A young woman fell to the ground unconscious, and two babies cried, tears streaming from the gas.

After running to relative safety a few hundred metres away, hundreds of the caravan members held a sit-in. Others continued to approach the border and were repelled by more tear gas.

"They want us to wait in Mexico but I for one am desperate. My little girl is sick and I don't even have money for milk," said Joseph Garcia, 32, of Honduras. "I want to work but they haven't given me papers. What do they want me to do? I want to do something and I can't stand it anymore."

Trump has deployed military forces to the border to support the Border Patrol and threatened on Saturday to close the entire southern border. But yesterday's action affected only the San Ysidro crossing and the US forces appeared limited to Customs and Border Protection officers and Department of Homeland Security police, backed by San Diego police and the California Highway Patrol.

An average of 70,000 vehicles and 20,000 pedestrians cross from Mexico to the United States at San Ysidro each day, according to the US General Services Administration.

Trump also tweeted on Saturday that migrants at the US-Mexico border would stay in Mexico until their asylum claims were individually approved in US courts, but Mexico's incoming government denied any deal had been struck.

Senior officials of the incoming Mexican government are meeting to discuss the plan, according to a person familiar with the matter. President-elect Andres Manuel Lopez Obrador is due to be sworn in on Saturday.