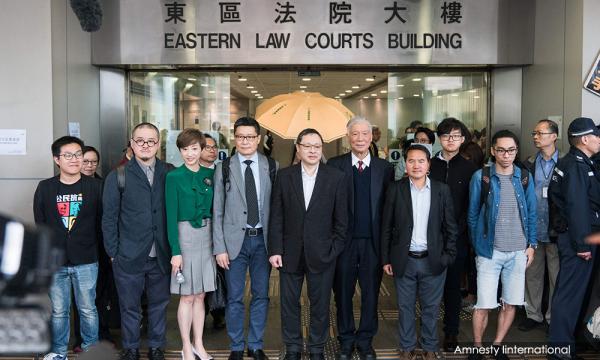 Three leaders of Hong Kong’s 2014 civil disobedience 'Occupy' movement pleaded not guilty to public nuisance charges at a packed court in the Chinese-ruled city on Monday where more than 100 protesters rallied in support of the activists.

Each charge carries a maximum jail term of seven years. Six others are also charged in a case that comes as the financial hub’s civil liberties are coming under increasing strain.

Supporters cheered and clapped as the democracy activists entered the packed court room, with Tai, Chan and Chu all wearing black jackets.

Another defendant, Raphael Wong, said while pleading not guilty to one charge: “I want universal suffrage.”

The nine stood defiantly before the court as they decried what some called “political persecution” for what was conceived as a peaceful civil disobedience campaign.

Chan announced last week that he would take early retirement from the Chinese University of Hong Kong to avoid the risk of being fired should he be jailed.

Tai told Reuters he hoped the trial would be an opportunity to “reboot the spirit of the people”.

'Power to the people'

The protesters waved yellow umbrellas, a symbol of the pro-democracy movement, and pumped their fists ahead of the hearing as they chanted: “I want universal suffrage.”

Another protester held an umbrella with the words: “Power to the People.”

In 2013, Tai, Chan and Chu began promulgating and planning a non-violent civil disobedience campaign to occupy streets in the city’s central business district should China not allow a truly democratic vote for its next leader.

The 'Occupy' campaign germinated in September 2014 and became part of what grew into the biggest populist challenge to China’s Communist party leaders since the Tiananmen Square demonstrations in Beijing in 1989.

Hundreds of thousands of people took to the streets of Hong Kong in sustained and continuous occupations of major roads for close to three months.

The trial is expected to last around 20 days.

The case could have repercussions for hundreds of other protesters who have not yet been charged.

Hong Kong returned to Chinese rule in 1997 under a “one country, two systems” formula, with the guarantee of a high degree of autonomy and freedoms denied citizens in mainland China, including freedom of speech and the right to protest.

However, critics that include foreign governments, business groups and activists say that the guarantee is ringing increasingly hollow.

The US-China Economic and Security Review Commission warned in a report to Congress last week that China had “ramped up its interference” toward Hong Kong and had “closed down the political space for pro-democracy activists to express discontent”.

A senior Financial Times journalist, Victor Mallet, was barred from the city last week after he helped host an independence activist at the Foreign Correspondents’ Club, in what critics said was an attack on freedom of speech.

Hong Kong leader Carrie Lam has repeatedly stressed Hong Kong respects media and other freedoms but has so far refused to give an explanation for Mallet’s de facto expulsion.