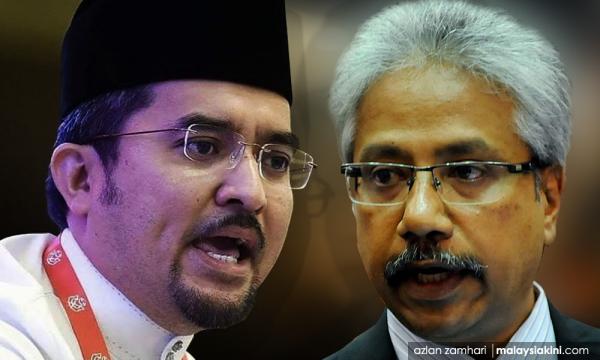 Umno Youth has demanded the resignation of minister P Waythamoorthy, over the circulation of an old video showing him criticising the alleged discrimination against ethnic minorities, particularly Indian Malaysians.

Its chief Asyraf Wajdi Dusuki said the minister in the Prime Minister's Department in charge of national unity and social wellbeing, must let go of his position in an honourable way, for failing to manage racism, religious, and unity issues wisely.

"Two days ago, his (Waythamoorthy's) old video went viral, where, as the main leader of radical organisation Hindraf, he was speaking ill of the country, in another country. He painted the picture as if Malaysia was facing a chronic human rights violation and oppression of other races and religions, including the demolition of Hindu temples and the denial of the rights of other races.

"Until now, he has not retracted the statements and accusations he made in the viral video. Even more upsetting, is, since he became a minister, he was supposed to be promoting unity among the races and religions, but he raises issues which can incite hatred and spark animosity among the races instead," Utusan Online quoted Asyraf saying in a statement.

Asyraf also claimed that Waythamoorthy's determination to bring the country into ratifying the International Convention on the Elimination of All Forms of Racial Discrimination (Icerd), showed the latter's "arrogance", as the majority of the rakyat sees the convention as challenging the special rights of the bumiputera and the position of Islam as the federal religion.

Asyraf further demanded the minister to retract the statements made in the video, and issue a public apology on the matter.

Recently, a video of Waythamoorthy's interview with a Dutch TV, shot about 10 years ago, started circulating on the social media and created an uproar among certain quarters.

In the video, which happened shortly after the Hindraf rally in November 2007, Waythamoorthy can be seen demanding the grouses of ethnic Indians be addressed.

He has since clarified that the video had a very different context.